This is the beginning of the letter trail.  This first letter written by John W. Derr to his family on September 3rd, 1861 after his arrival at Camp Curtin in Harrisburg, Pennsylvania.   Below, you will find a copy of the original letter with the corresponding envelope.  Family lore says that John had but the equivalent of a 3rd grade education.  John's limited education, along with his "Pennsylvania German (Dutch)" heritage gave me a challenge in translating the words and their meaning.  The letters display spelling errors, grammatical errors as well as local colloquialisms which I will try to put into context for the period, locality and the man. 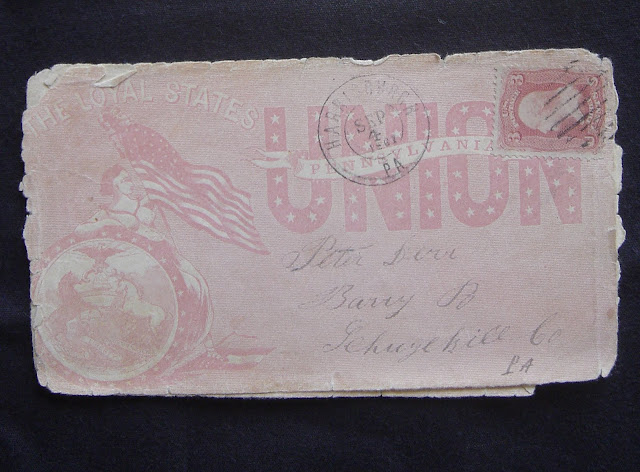 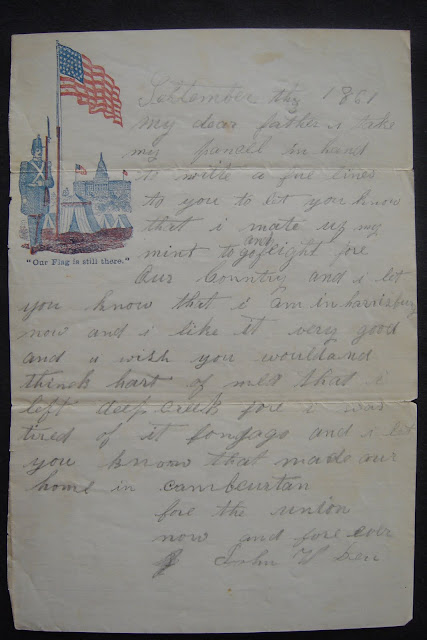 For the Union, now and forever,


Camp Curtin, named for Governor Andrew Curtin, was one of  the Union’s “boot camps” during the Civil War.  From 1861 to 1865, more than 300,000 Union soldiers were processed and trained for the Civil War at this camp in Harrisburg which is now bordered by the current landmarks of Fifth Street, the railroad tracks next to the Farm Show Building, Maclay Street, and Reeds Lane (from a speech by Harrisburg Mayor Stephen Reed, November 11, 1990).

My interpretation of this letter is that JWD, a 22 year old man with few prospects living at home with his parents and siblings, decided to enlist in the army to participate in an adventure of a lifetime.  By reading the letters, pension affidavits and other documents, I believe he was one of many friends who did the same thing.   This letter is part information as well as an apology to his parents, who were probably worried about him.   At first, I thought that this "stunt" of his was a particularly cruel and thoughtless act, given the worry it must have caused his parents.  Now I think that maybe his parents knew where he was and what he was doing.  Since many of his friends joined the Union army at the same time, that area of the Deep Creek, must have been abuzz with talk about...."where did all the boys go"?


I hope you enjoy this first letter.....

Posted by JWDletters at 3:28 PM