As I mentioned in my last posting, I am stretching out the posting of the letters, in order to prevent long gaps.  The November 20, 1864 letter is from six weeks ago, but with the next one being in the middle of February 1865,  I thought that this was a pretty much even spacing.


The letter this month, is a bit interesting, in so much as John is losing some of his formality in the writing process.  In this letter, like the next, he doesn't bother to sign it, nor does he indicate the location of the writing.  He simply tells his parents to send their letters as they have before.  In other words...the siege and encampment at Petersburg, Va. has become long...and boring for him.  He is now "driving team" and hence his discharge paperwork as a "Waggoner".  This is a direct result of his wounding at the Second Battle of Bull Run and his inability to march long distances.  The army still needed good battle tested men, and John was that type of soldier.  His disability made him a good candidate for teamster work, as well as trench fighting.  This disability in his leg would nag him the rest of his life making employment/labor difficult.  That coupled with his weakened condition from the many lung ailments he contracted during service, contributed to his early death at age 37.

The letter warns his parents that many "friends" will try to borrow money from him, via them, based on so called promises John made.  This was common during the war.  Most soldiers had sent their pay and bounties home to be saved for after the war.  This was common knowledge of local folks and people would try to take advantage of these relatively large sums of money.  John made it clear to his parents...no loans to friends. 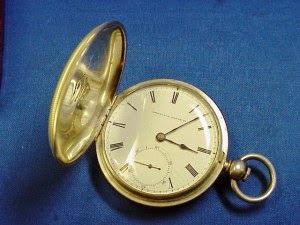 Apparently, the saga of the broken watch has come to an end with the watch being lost or stolen on the shipment back to John.  Any suspicions that John had of his friend George Artz...who was entrusted with the watch...are dispelled by George paying John the $30 value of the lost watch.  A pretty good and trusted friend. 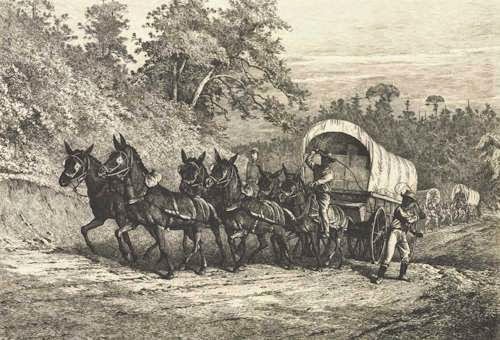 John also does a bit of bragging in this letter, by telling his parents to tell his friend's father Peter Fetterolf, that he is driving up to six mules.  That gives the home town folks a feel for the level of responsibility that John has and the difficulty level of driving team.  Driving one or two tandem mules is one thing, but driving a team of six is significantly more difficult. 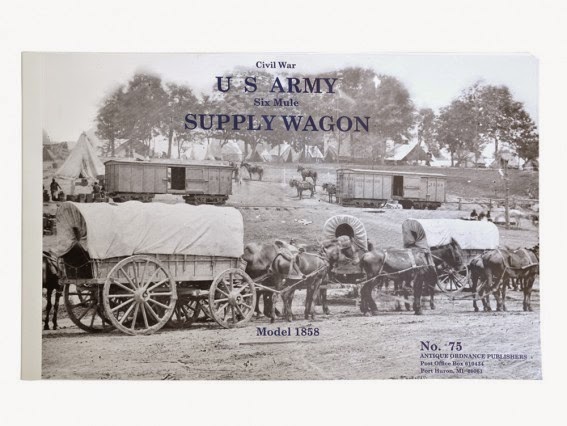 
My Dear Father and Mother,

I take my pen in hand to write this few lines to you to let you know that I am well at present time and I hope that this few lines will find you in the same state of good health.  I received your letter this day and I was very glad to hear from you and to hear that you are all well at present time and have all got plenty work.  We have much rainy weather out here, but we had no snow yet.  If Peter Fetterolf is at home yet when you got this letter tell him to write to me and let me know where he is.  Tell him that I would send my best respects to him and to all the rest of the boys.  Tell them that I am driving team.  Tell Peter Fetterolf that I had command ober (over) six mules.  Don’t give none of my money to nobody without I tell you to do so for there is some men at home that want to have some money from me and I wouldn’t let them have any.  They might come there and tell you that I sent them there and it wouldn’t be so.  For that reason give none to nobody unless I tell you to do so.  I lost thirty dollars by sending my watch home with George Artz and he was to send it back to me.  But it either got lost on the road or he didn’t send it to me.  But I think he did else he wouldn’t put my money to its place as he did.  I have no more to write for this time.  So I will bring my letter to a close for this time for this a raining day.  So this few lines from son John W. Derr. 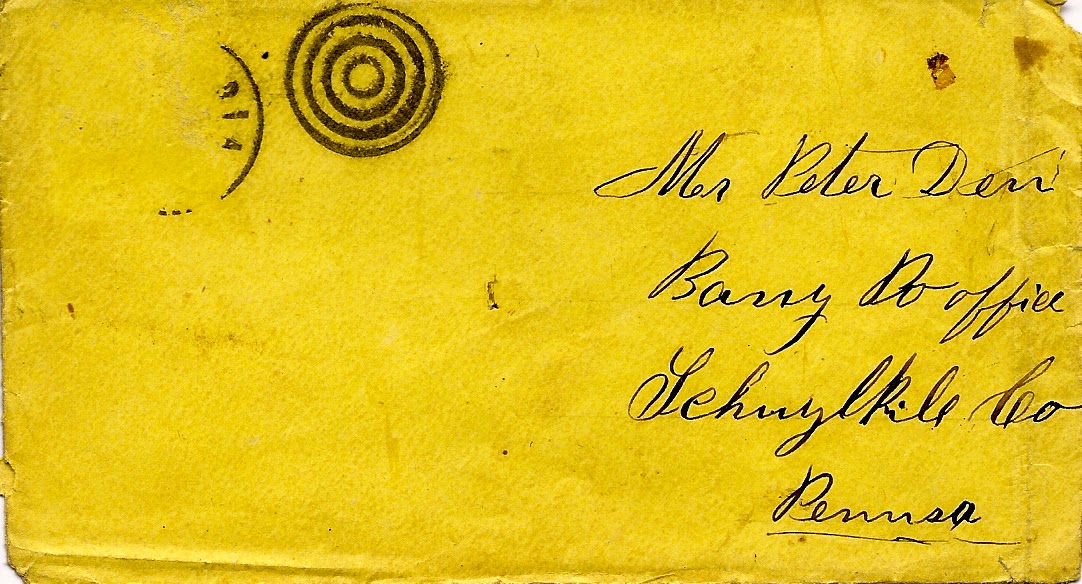 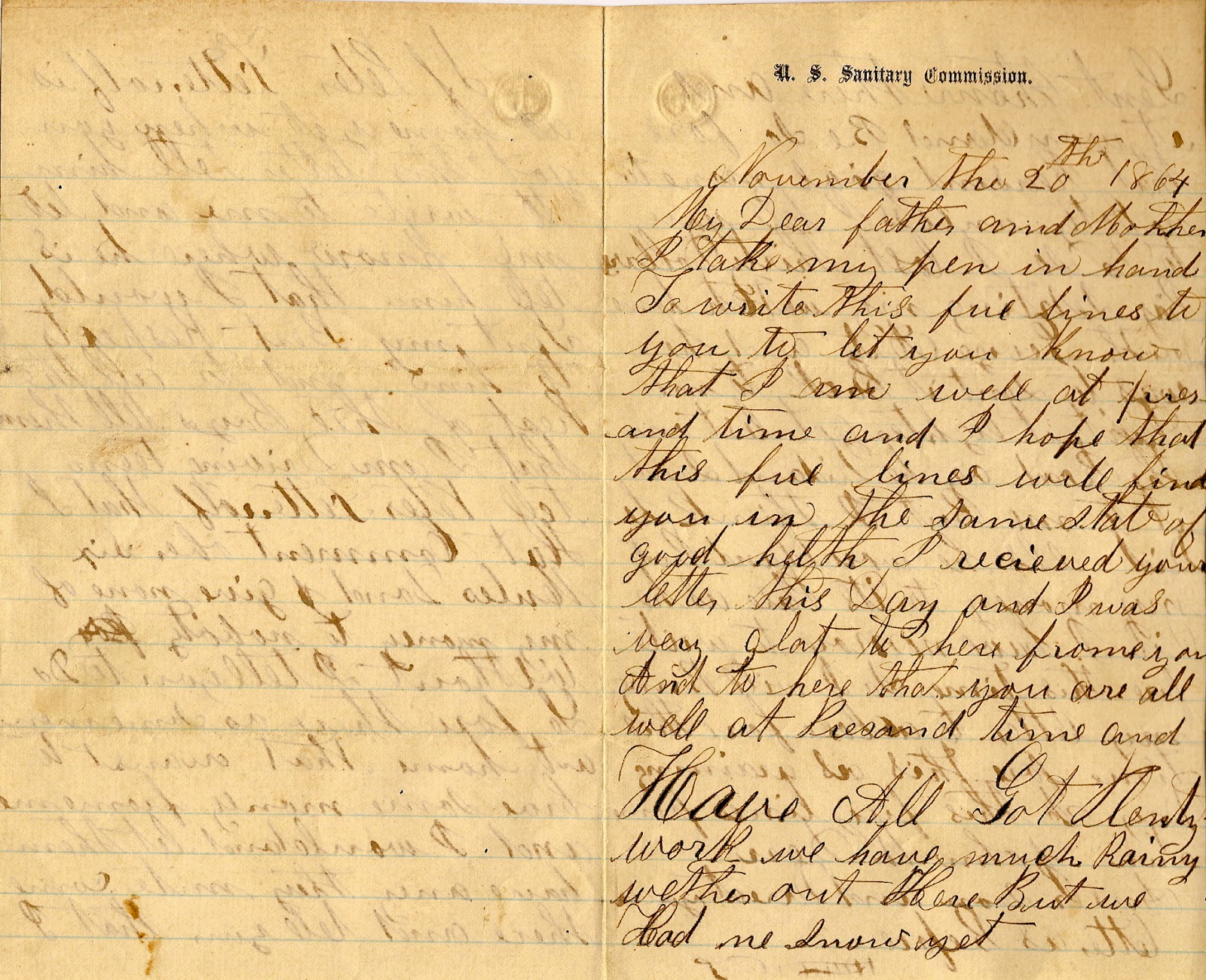 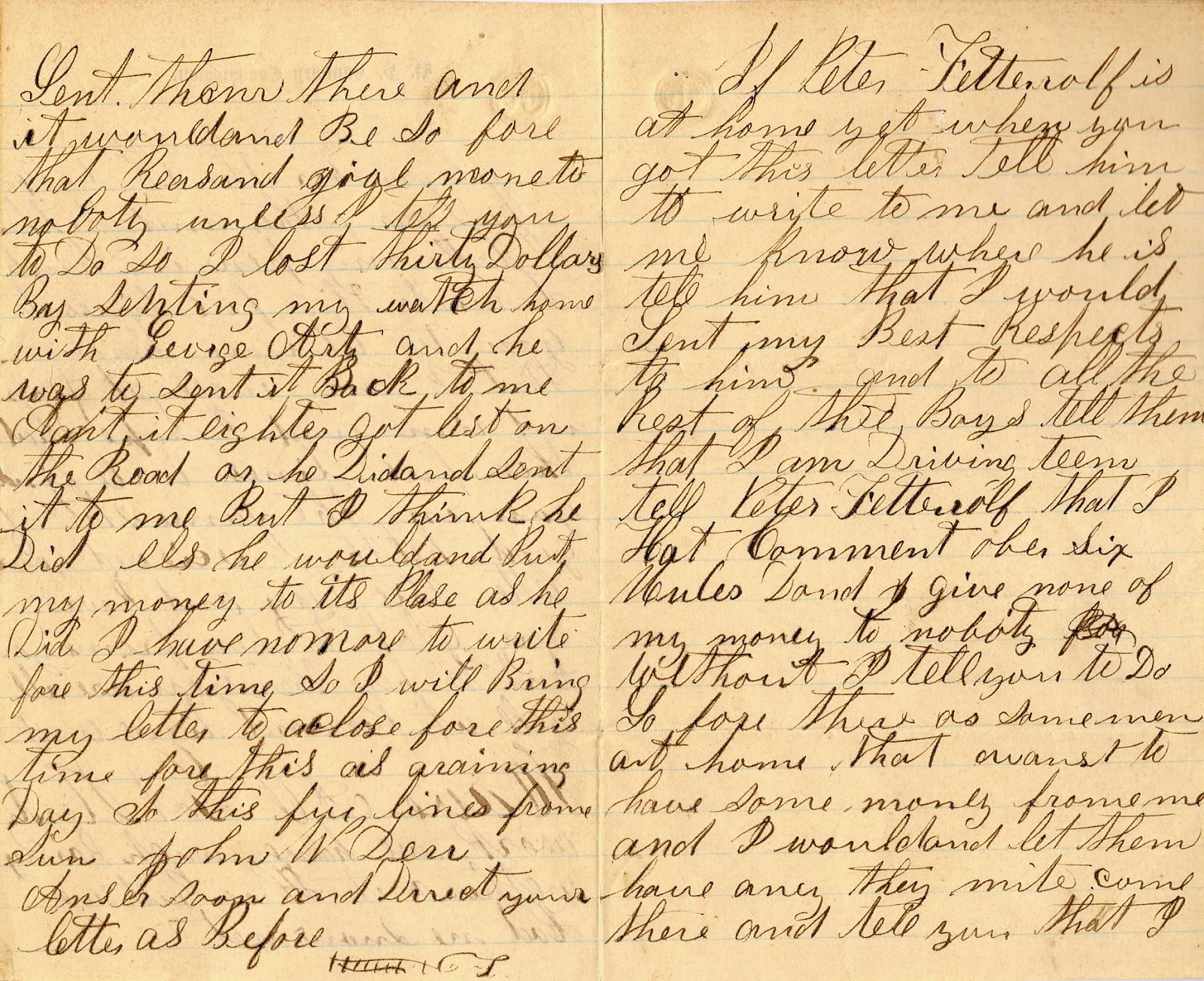 Posted by JWDletters at 9:49 AM