I'm a day late on this one, but as they say...better late than never.

The digging goes on...and so does the camp life for John W. Derr.  The mine is still in progress with the eventual explosion on July 30th.   Though this letter does not reflect it, John spends his days working in the mine as well as driving team for the dirt removal.

Letter #38 discusses a commitment John made to John Kramer to lend Kramer $200.  He is confirming his verbal commitment to Kramer and tells his father to do the deal, but to get "his note and a good bale" from him.  He has loaned Kramer money before and he directs his father that when he gives him the $200, that if some of the money Kramer paid back in the past was not greenbacks (or gold/silver) that his father should use that money for the loan.

During the war, and prior to the war, there were many varieties of currency printed.  Some was literally not worth the paper it was printed on.  As a result, most only wanted to deal in hard currencies such as gold or silver...and at a minimum..."greenbacks".  Greenbacks were printed by the Federal government and had slightly more trust than local currencies...but not much.  Memories of the old Continental currencies, printed during the Revolutionary War, were still fresh in the minds of Americans.  The Continental currency essentially became worthless after the war and many soldiers of the Revolution held worthless pay.   During the Civil War, many of the soldiers had grandfathers that had fought, so they knew the stories of "bad money".  An earlier letter (Letter #19) illustrates his concern about taking local money.   In that case...Schuylkill money...

My Dear Father,
I take the present opportunity of informing this few lines to you to let you know that I am well at present time and I hope that this few lines will find you in the same state of good health.  I let you know that John Kramer ask me to lend him two hundred dollars of my money and I did promise it to him.  So if he comes for it and gives you his note and a good bale (bail) * on it you can give it to him but no sooner than you get the note.  He told me that I need to use only on bail but I will leave that to you.  Or if you don’t know anybody let him put old Reed or Dengler or who you think is best to have on (it).  And if he paid you any money that ain’t greenbacks give him that and see that you won’t get cheated.  It is more trouble than it is worth but still I have to do it.  I have no more to write for this time so I will bring my letter to a close.  This few lines from your son.

*It appears that the term bail as used in this letter was, during this period of time, synonymous with our current use of the term co-signer. 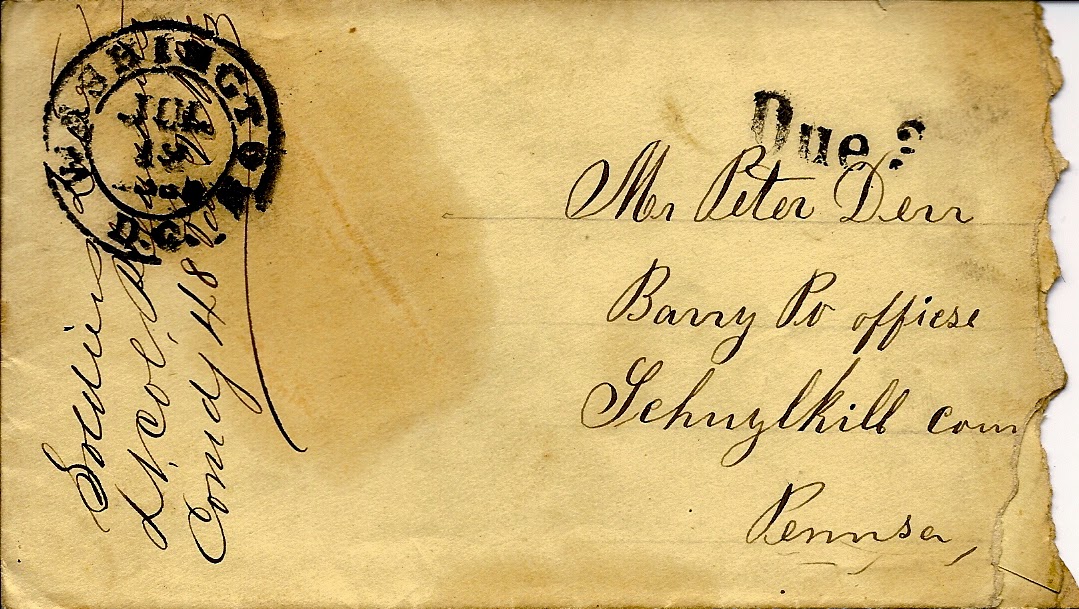 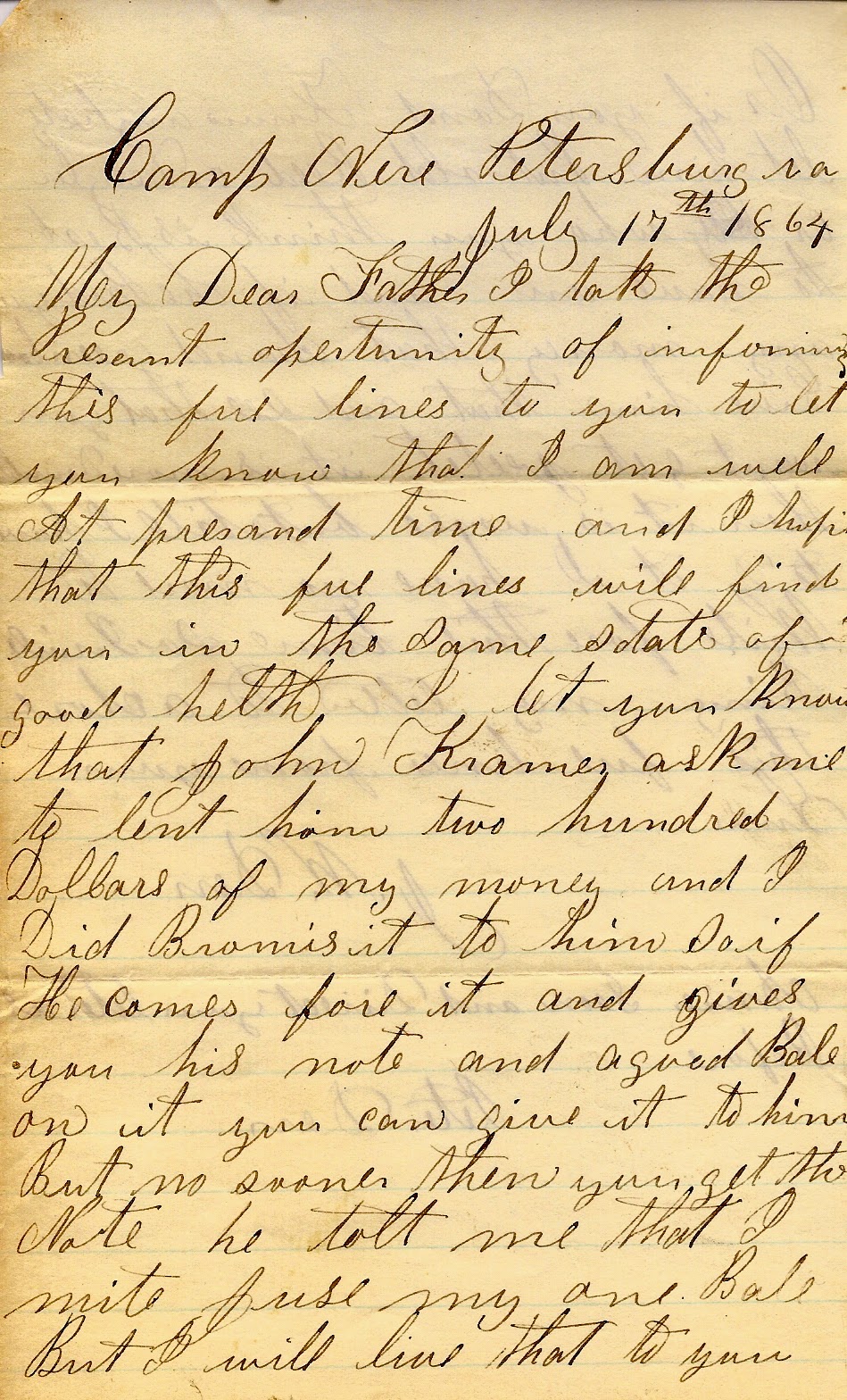 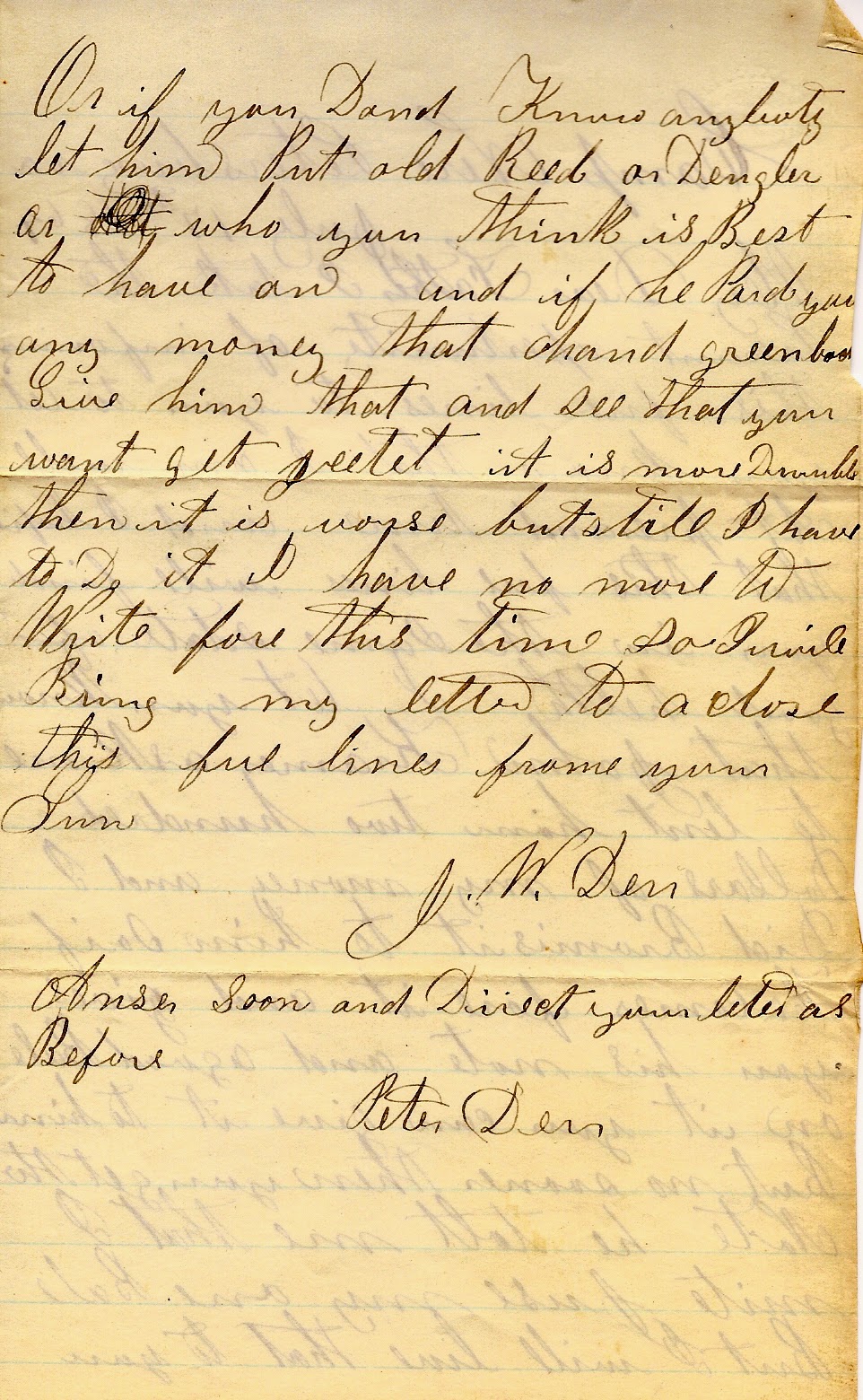 Posted by JWDletters at 4:40 PM