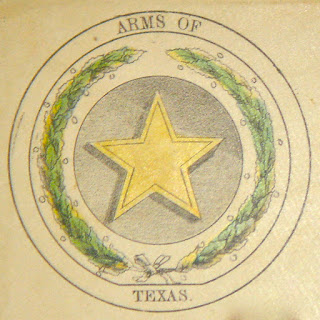 FLASH!....I was pouring through some letter documents and found two letters that have never before been transcribed.  One is dated September 18, 1862 and the other is dated September 27, 1862...both were written while John convalesced in Georgetown College Hospital after his wounding at the Second Battle of Bull Run.

I have decided to tag the first one Letter #21a and the second one as Letter #21b.  Today I will post Letter #21a, but stay tuned for Letter #21b which I will post next week.  I guess later is better than never, so here goes.

*** I have renumbered the letters to correspond to their correct order...this letter is now #23.***


Letter #21a 23 dated September 18, 1862 is much as the others, a short letter from him to his parents while he laid in a hospital ward trying to recover from his "flesh wound".  As I have stated in previous posts...wounds that appeared to be minor and uncomplicated, would end up being life threatening.  This was primarily due to infection, diet and poor hospital care.  John alludes to the poor state of hospital care in this early part of the war in a previous letter.   The United States government was ill prepared for the level of carnage that this war, with its modern weaponry would inflict on soldiers given the antiquated strategies used by the officer corps.   In this letter, John is responding to a letter that he received that day from his parents and is interested in some family news.  Apparently a baby died at home and he is inquiring as to the cause and his concern.  I believe this must have been a brother or sister...a child of his parents, though I have no records to confirm this assumption.  Elizabeth, his sister,  is mentioned again in this letter, and he he indicates his desire to have her write to him.  More than likely, John is extremely bored, homesick and lonely and enjoys receiving mail...his only entertainment.

Unfortunately, this letter is written in lead pencil and is very difficult to read in some places.  You will see my parenthetical blocks which indicate the illegibility of these parts of the letter.

One interesting note....He instructs his parents to ensure that any letter they pay for at the Barry Township post office in Pennsylvania have a stamp on it.  Even though his parents paid the postage on this letter, the postal service at the hospital would not release it to him until he paid cash for the assumed postage due.  Rather rough on a soldier to have Washington bureaucrats withholding mail from home to a wounded soldier due to the lack of a postage stamp!

I take my pencil in hand to inform this few lines to you to let you know that I am very well today on this evening it is, and I hope that this few lines will find you in the same state of good health.  Further I let you know that I received you letter today and was very glad to hear from home and to hear that you are all well at present time for I haven’t heard from home for the 8 weeks all though I am sorry to hear that the baby died.  But I can’t order it any.  You didn’t mention how long it was sick or what his sickness was.  Further I don’t know much to write this evening and I can’t write much because leg don’t heal for it.  I wish you would tell Elizabeth that she should write a letter to me while I am here.  Write soon.  Again from your dear son.
John W. Derr

Further I must let you know that there are a few words in that letter that I can’t understand what the meaning is.  But I don’t think that I do need any (unintelligible).  If you do pay for your letter  (unintelligible)…put them in  (unintelligible)…post office then make them put a stamp on.  This last letter you wrote and paid for, they (unintelligible) do but here was no stamp on and I had to pay it again here before they would give it to me. 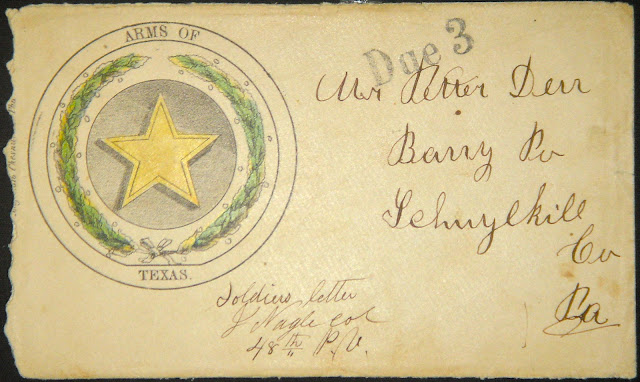 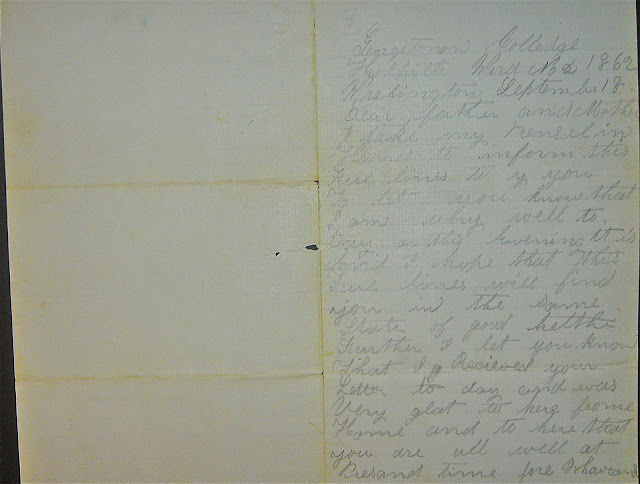 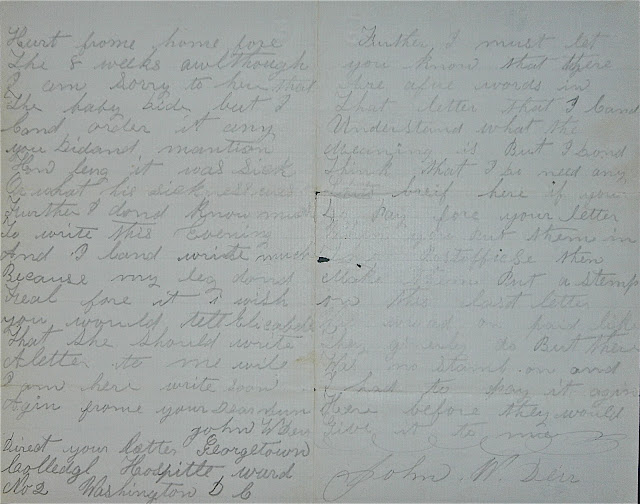 Posted by JWDletters at 2:56 PM