Money...money...money!  Always about the money!  That is what I used to think of the general content of the the letters of JWD.  Originally, I had envisioned grand and glorious letters written home to friends and family describing the heroic actions of my ancestor during this most momentous time in our nation's history.   The more I read...the more I digest...the more I understand the man who was my great -great grandfather.  I guess what I find most interesting and satisfying is that he was no different than other soldiers who have fought for our country.  Even to this day, soldiers write (or more likely today they use email, Skype, or cellphones) home to talk about mostly day-to-day life and to catch-up on events at home.  Soldiers today generally don't write detailed descriptions of battles, actions taken...nor do they sit at home and wax fondly of the days of war.  I can understand this now.  For a soldier in the field, constant letters containing the true dangerous day-to-day actions, would only serve to worry family at home.  After all, JWD was writing to his parents who were already very worried about his safety, and writing to them to confirm what they read about in the papers and what was gossiped about at home would only add to their fears.  So it goes...his letters serve as a communication vehicle, a comfort, and a touch of the home front for a soldier who was both bored and terrified in the field.

Letter #19 from August 1, 1862 is interesting from a historical perspective...not of the war...but of the state and belief in the monetary system of the United States at that time.  Today, we take for granted the value and fidelity of United States paper currency.  In 1862, the general population did not have as much confidence in paper money.  Prior to the Civil War, paper currency was handled on a local level with states, counties, and even cities/town issuing their own paper currency.  This currency was backed by gold or silver and could be redeemed in that location at any time.  This presented problems as the money moved further away from the locality from which it was issued.  Eventually the United States government started issuing its own currency via "demand notes", in 1861.  By 1862, these were replaced by the more commonly known, "greenbacks" reserve notes.  This was done in order to finance the war effort by issuing dollars in paper vs. the increasingly scarce precious metal coinage. By 1862, copper pennies were so scarce that private companies and banks began issuing their own pennies...hence the civil war token was born. 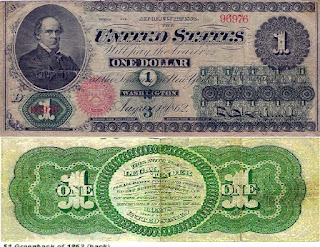 In this letter you can see how JWD tries to explain to his parents about his wishes on what kind of money they should take for his pay disbursement.  In this case, he is telling them what kind of deal was acceptable.  Hunsinger described in the letters, was a merchant in Minersville, Pa, and he played a roll in providing a payroll cashing service for family members drawing pay for soldiers in the field.  This was a valuable service, since the last thing a soldier wanted was to have all of his monthly pay allotments on his person and to risk losing it during a battle, or having it stolen by friend or foe!  Most had their pay drawn at home, and services provided by Hunsinger handled the details.  JWD directed his parents and essentially educated them on how, how much and what to accept, so that they would not be taken advantage of by the merchant.  In essence what he tells them is that if he pays in "United States Money" (Greenbacks) that they owe him nothing because of his lack of faith in the new currency.  However, if he pays in Schuylkill County paper currency, then they should take a lower value and get gold or silver instead.  So...he had little faith in either paper currencies, but was willing to take less money for precious metals....e.g. 70 cents on 20 dollars....or 3.5% fee for metal.


The last part of the letter is for his entire family to comfort them and tell them not to worry about him.  I suspect he had received letters from brothers and sisters who were concerned about him and he felt he needed to tell them that he will be alright.

Lastly, he inquires about his sister Elizabeth and her marriage.  I am not sure what happened there, but I find it interesting that he inquires and has not been told by the family....something suspicious!

I take my pen in hand to inform this few lines to you to let you know that I am well at present time and I hope that this few lines will find you in the same state of good health.  Further I let you know that I received your letter on the last of July and I was very glad to hear from you and hear that you are all well at present time.  But I don’t know what to say about my money what you draw from Hunsinger but I will tell you what to do about it if he pays the United States money, them kind of bills what I sent home the first time.  Then you will take it and don’t give him the 70 cents from twenty dollars.  But if he pays Schuylkill County money or any other kind of old paper money then you may take gold and silver.  That is if he takes only 70 cents from the 20 dollars you must know best what to do.  You know that I am satisfied if you do only what is right and take good care of it for I need it very bad when I come home.  But you stated in your letter that I have only 51 dollars of soldier’s money at home and I did send 28.50 cents home from here and you did draw 40 dollars at home and that would make 68.50 dollars and fifty cents and you can draw 20 dollars again now and twenty I had at home.  Then that all together would make one hundred and eight dollars and fifty cents.  You mustn’t give no money to any body that don’t give it back again.  You will use some of my money to buy paper and envelopes and to pay the letters for I must write often to you and let me know all about it what I wrote to you.  Answer this letter well and soon.

Dear Father and Mother Sisters and Brothers, you must not trouble yourselves about me.  You must always think that I would come home and very likely I will come home.  Further I let you know that I answered every letter to Elizabeth that I got from her and one more.  But I will write to her as long as I can draw the pen over the paper.  But I heard that she got married and no one will write to me whether it is so or not.  But now I must come to a close and say goodby for this time. Answer this letter as soon as you get this from me.  Direct your letter as before for I can’t write the direction here.

So much from Your Dear Son, 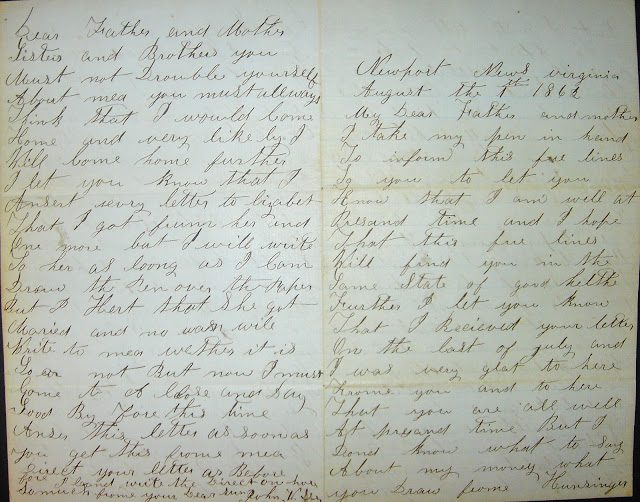 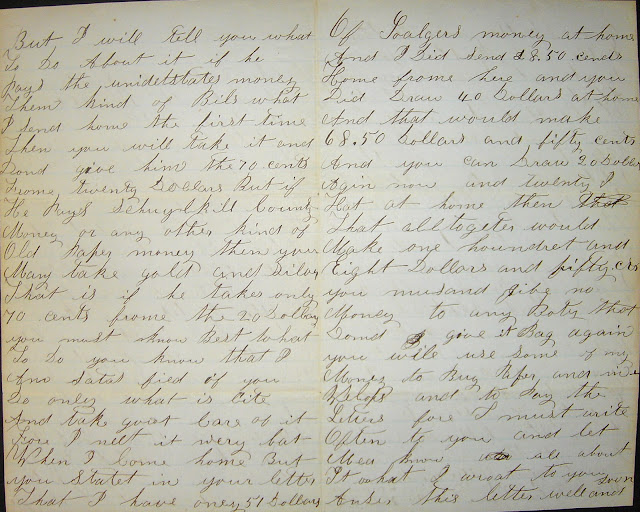