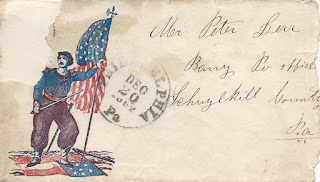 The closeness of the Christmas season must have prompted John to write home more often with 3 letters written in less than a week and a half.  Sitting in a Philadelphia hospital 100 miles away from home...so close, yet so far...must have been rather depressing.  The best way to boost his spirits was to write home, and get return letters.


In this letter, John answers his parent's question regarding sending food parcels to him in the hospital as a supplement for the wonderful army hospital food.  Interestingly enough, the response is much as you would expect...."no".  The doctors and nurses were very strict about soldiers eating outside food ostensibly to prevent food poisoning or patients who should not eat at all from doing so.  Food borne illnesses along with general sanitation issues could take a recovering patient to a fatal case of diarrhea in very short order.  However, it is ironic that the lack of modern day sanitation would not be understood in this period of history and food restrictions would be followed.

John refers to apples and to sausage, which in the Pennsylvania German tradition would be smoked and cured leaving it fairly safe to transport and eat later.  Also, he refers to "pudding", which is a term that is still used today in Pennsylvania.  Pudding is a liver ring sausage that is usually mixed with meal and cured.  It has a rather unappealing gray color, but is has a wonderful taste.  My father loves it and I try to buy him a ring whenever I am at the Dutch market.


The last part of the letter is a small note to his younger sister, Elizabeth, who's boyfriend (beau) has been drafted into the war.  He sends her comforting words and sympathizes with her pain.  All-in-all, a touching note from a big brother.

I take my pen in hand to inform this few lines to you to let you know that I am well at present time and I hope that these few lines will find you in the same state of good health.  Further I let you know that I received your letter and was very glad to hear from you and to hear that you are well at the same time and I received the ten dollars also in the letter last night form Georgetown.  You stated in your letter that I should write to you if I dast (dare) eat any sausage and apples and if so you would send a box to me.  I do let you know that I dast eat anything that I like and I would like to have some pudding and some sausage but you better not send it to me as long as I am in this hospital here for the doctors don’t allow anything to come in here or be fetched in by anybody.  They are very strict here about anything like that.  So you better not send it to me now.  If I am out of the hospital once, then you can send one to me but I am very thankful for your kindness and I am very glad to hear that you haven’t forgot me yet as I hope you never will.  So I don’t know much more to write t o you for this time.  These few lines are from your dear friend or rather son.  Answer this letter soon and don’t forget it.  This from your respectful son.

My Dear Sister Elizabeth, I am sorry to hear that your boe (beau) is going to war but I wish you would let me know in what Regt. That he is and what company for I would like to write a letter to him or if he is at Fredericksburg it might be very likely that (I) could get to see him for I think I must soon leave the hospital and go to my Regt.  These few lines from your brother John W. Derr. 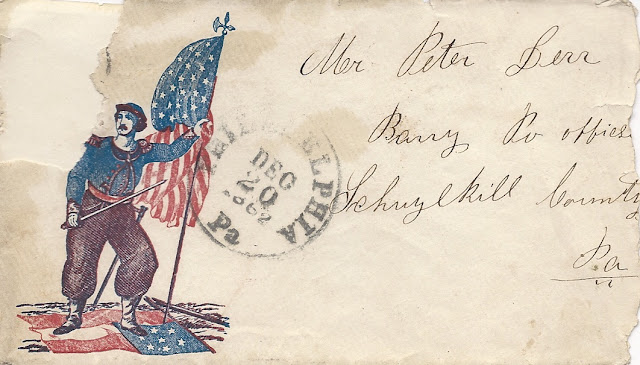 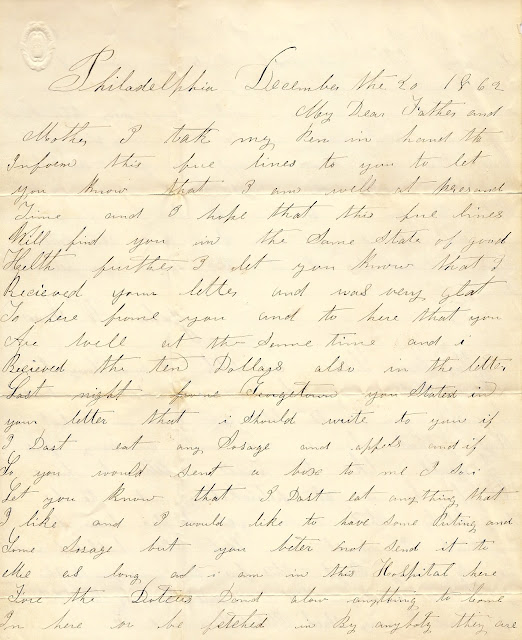 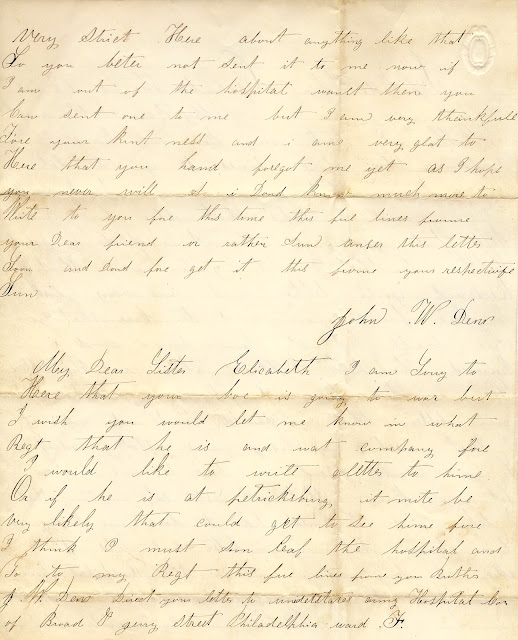