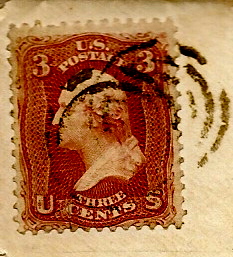 The letter of June 11th, 1862 is much like others...repetition of prior letters, but in this case it includes an acknowledgement of the receipt of a letter from his parents.  In prior posts, I wrote about how soldiers often wrote multiple letters of the same subject due to the lack of confidence in the postal service, especially within a theater of war.  I wonder how many soldiers in other wars such as World War I and World War II did the same.   I suspect that it is not a frequent practice today owing to the use of the internet, email and telecommunications, which makes real time communication much more available.  Such is the life of a Civil War era soldier....and John W. Derr.

In previous posts, JWD had requested that his mother send him shirts that he could wear under his uniform frock.  The usage of wool as the primary material for uniforms in the 19th century made the utilization of cotton and soft flannel, a necessity.  Being June in North Carolina, and based on his prior descriptions of heat and unhealthy air, a nice new set of shirts was what he needed to stay somewhat comfortable.  JWD was wise to request gray flannel shirts vs. the white shirts his cousin John H. Derr requested...as he describes.  Keeping white shirts clean-looking was a real chore and downright impossible in the environment in which the soldier lived.

Overall, not a very revealing letter, but it does close the loop on the concern JWD had for the lack of parental correspondence!

I take my pen in hand to inform this few lines to you to let you know that I am well at present time and I hope that this few lines will find you in the same state of good health.  Further, I let you know that I received your letter on Saturday the 7 and my box on Tuesday the 10 with our shirts and we was very glad to have them and my shirts fit very well.  But the others are much too light and they are too long but I am well satisfied with them and John H. Derr he is very thankful for the favor which you done for him but he is sorry that he didn’t send for some grey ones like mine but he is well satisfied with them and you mentioned in your letter that you drawed my money again for the last two months and I am very glad that you did and take good care of it.  So I didn’t know much more to write this time so I will come to a close and say good by for this time.  Answer this letter as soon as you get this from me. 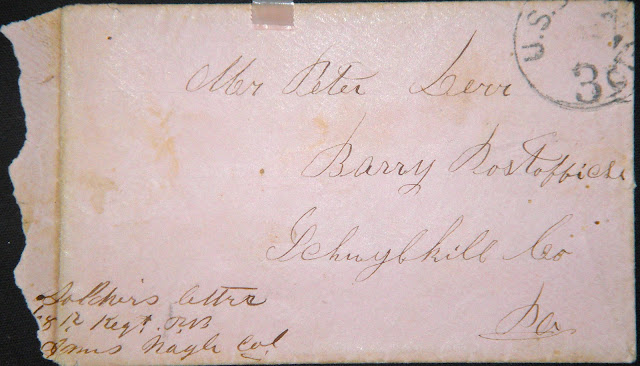 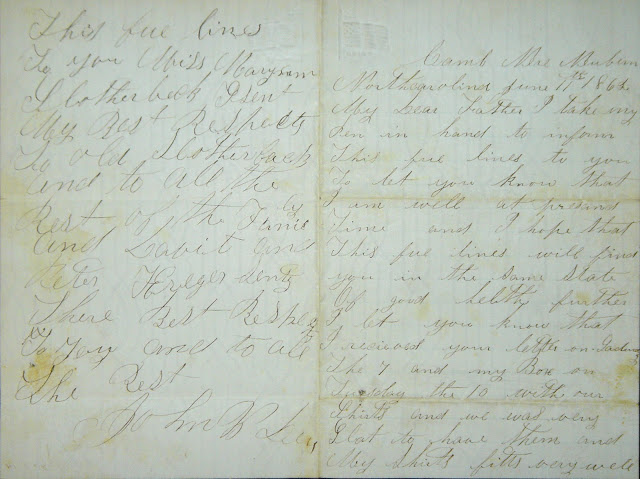 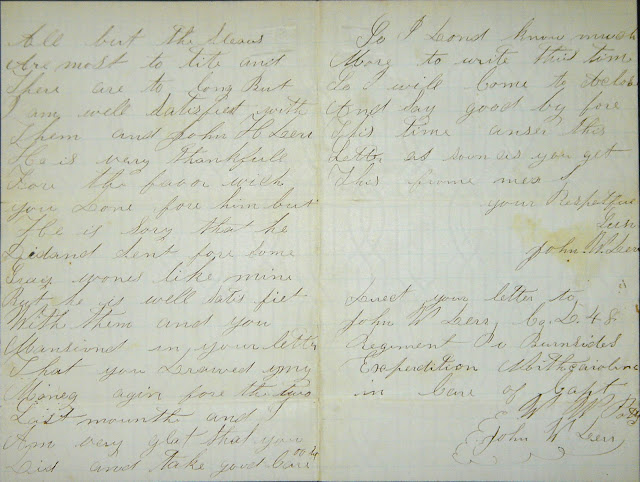 Posted by JWDletters at 7:22 PM