Rest and Relaxation at the Willard

I know its been a while since the last post....The next letter does not come out until April 7th, so I have been lax in updating this post to fill in the gaps.... 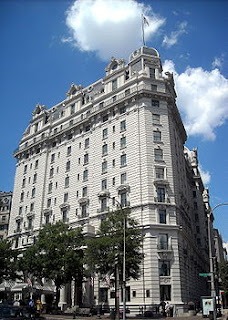 This past weekend, my lovely wife, daughters and son-in-law treated me to a weekend at the historic Willard Hotel in Washington DC.  For those of you who don't know the Willard, it has been witness to the political history of Washington as well as the nation.  The Willard is located at 1401 Pennsylvania Ave about 2 blocks from the White House and right next to the Treasury building.  It is a beautiful and stately building which takes you back to the splendors of the 19th century.  The current hotel was built in 1847 when Henry Willard combined six separate buildings (built starting in 1816) into a general overall structure.  The hotel has been improved over the years and the current structure was formalized in 1901.  For those who know their Civil War history, it was the place that Ulysses Grant stayed when he came to Washington with his son to accept command of the Army of the Potomac.  It has been the location preferred for political debate, military reunions and gentry use in years gone by. 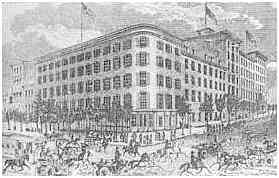 Martin Luther King, Jr. penned his famous "I have a Dream" speech while staying in the hotel and prior to giving the speech in 1963.....

When we checked into the hotel last Saturday, the hotel manager struck up a friendly conversation with me and then to my surprise, upgraded us to the Martin Luther King, Jr. suite....the suite that he used to pen the famous speech.  What a room!  Besides the beauty of the suite itself, the sheer historic significance of the room and actual place where history was made....was awe inspiring.

The Willard has a small hotel museum inside that gives a small glimpse into the history of the hotel.

One of my favorite parts was a excerpt from Charles Dickens during his visit to America and Washington in 1824.  He was NOT a fan.  Dickens stayed at one of the many buildings that eventually evolved into the Willard of today...but in 1824....Willard it wasn't! 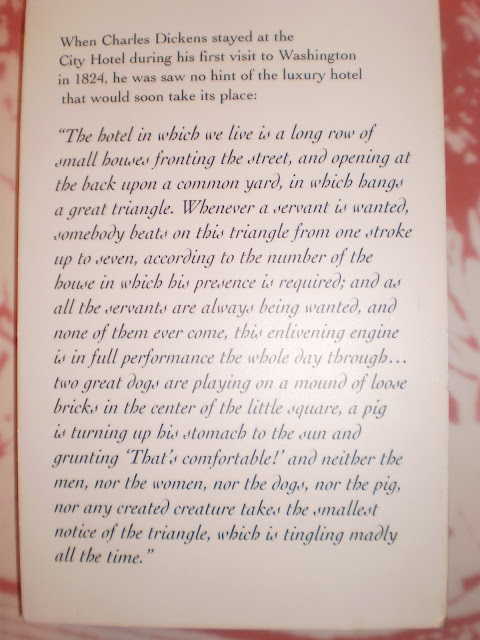 The weekend was a blast!....not withstanding the Occupy Wall Street crowd camped across the street....

Thanks to my beautiful wife and wonderful daughters....and son-in-law....

Posted by JWDletters at 9:34 AM No comments:

Email ThisBlogThis!Share to TwitterShare to FacebookShare to Pinterest
Labels: Willard 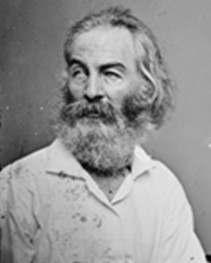 I spent the last week in Texas and Arizona and had some time to finish reading Walt Whitman's short poetry book, Drum-Taps while on the various flights.  I had not been one prone to reading poetry, but with this project and my interest in Walt Whitman, I have found myself enjoying the content and depth of feeling in his writings.  Some of these poems, in my opinion, are rather "corny" and not to my liking, but others are very touching.  For example...I would put his poem Song of the Banner at Daybreak...into the "corny" category, while others such as Come up from the Fields Father...and...The Wound-Dresser...are very well done.  There are a few that are just plain excellent...Dirge for Two Veterans....I Saw Old General at Bay....and my favorite...Ethiopia Saluting the Colours.  The latter being poignant, thought provoking...and slightly sad.

In my freshman year in college I was assigned a topic for my English 101 research paper.  That topic was:  The Effects of the Civil War on the Poetry of Walt Whitman.   I spent two weeks researching and writing the paper.  Having always received "A's" in high school English, I exerted limited effort on the task.  The result was a failing grade on the paper.  I have always remembered that disaster and I guess that prompted me to go back and do the work that was never done by a lazy college freshman.  I am glad I did.

Here are two of my favorite poems from Drum-Taps, by Walt Whitman....

Who are you dusky woman, so ancient hardly human,
With your woolly-white and turban'd head, and bare bony feet
Why rising by the roadside here, do you the colours greet?
('Tis while our army lines Carolina's sands and pines,
Forth from thy hovel door thou Ethiopia com'st to me,
As under doughty Sherman I march toward the sea.)
Me master years a hundred since from my parents sunder'd,
A little child, they caught me as the savage beast is caught,
Then hither me across the sea the cruel slaver brought.
No further does she say, but lingering all the day,
Her high-borne turban'd head she wags, and rolls her darkling eye,
And courtesies to the regiments, the guidons moving by.
What is it fateful woman, so blear, hardly human?
Why wag your head with turban bound, yellow, red and green?
Are the things so strange and marvellous you see or have seen?

COME UP FROM THE FIELDS FATHER.

Come up from the fields father, here's a letter from our Pete,
And come to the front door mother, here's a letter from thy dear son.
Lo, 'tis autumn,
Lo, where the trees, deeper green, yellower and redder,
Cool and sweeten Ohio's villages with leaves fluttering in the
moderate wind,
Where apples ripe in the orchards hang and grapes on the trellis'd
vines,
(Smell you the smell of the grapes on the vines?
Smell you the buckwheat where the bees were lately buzzing?)
Above all, lo, the sky so calm, so transparent after the rain, and
with wondrous clouds,
Below too, all calm, all vital and beautiful, and the farm prospers
well.
Down in the fields all prospers well,
But now from the fields come father, come at the daughter's call,
And come to the entry mother, to the front door come right away.
Fast as she can she hurries, something ominous, her steps trembling,
She does not tarry to smooth her hair nor adjust her cap.
Open the envelope quickly,
O this is not our son's writing, yet his name is sign'd,
O a strange hand writes for our dear son, O stricken mother's soul!
All swims before her eyes, flashes with black, she catches the main
words only,
Sentences broken, gunshot wound in the breast, cavalry skirmish,
taken to hospital,
At present low, but will soon be better.
Ah now the single figure to me,
Amid all teeming and wealthy Ohio with all its cities and farms,
Sickly white in the face and dull in the head, very faint,
By the jamb of a door leans.
Grieve not so, dear mother, (the just-grown daughter speaks through
her sobs,
The little sisters huddle around speechless and dismay'd,)
See, dearest mother, the letter says Pete will soon be better.
Alas poor boy, he will never be better, (nor may-be needs to be
better, that brave and simple soul,)
While they stand at home at the door he is dead already,
The only son is dead.
But the mother needs to be better,
She with thin form presently drest in black,
By day her meals untouch'd, then at night fitfully sleeping, often
waking,
In the midnight waking, weeping, longing with one deep longing,
O that she might withdraw unnoticed, silent from life escape and
withdraw,
To follow, to seek, to be with her dear dead son.

This book, along with other Whitman books are available free of charge on the Gutenberg Project website.  Drum-Taps is available at: