As May, 1862 came to a close, JWD spent most of the month battling a bad catarrh (severe cold) and bronchitis.  His letters at this time do not indicate this, but the pension affidavits from the pension application of his widow Magdalena in 1878, indicate that he suffered during this period from these afflictions.  This was the second major illness suffered by JWD in his short period of service at that time.  The first was in the November/December 1861 time frame.  These multiple illnesses along with others later in the war (illness after digging the Petersburg Mine) contributed to his early death in 1876.  Though interesting and pertinent, the worst of his service problems would come in just a few months when he was wounded at the battle of Second Bull Run (August, 1862).  Needless to say... JWD's first year of service in the army was the worst of his life.

Letter #13 on May 24, 1862 is a typical JWD letter.  Filled with personal concerns regarding money and requests for packages.  This letter, amongst others, highlights how difficult communication was during this period of time.  Today, we take for granted the ability to rapidly and effectively communicate with any person around the globe.  Not so, in 1862.  Many letters were repeated since a guarantee of delivery was not always possible.  You can see the frustration in both parents and JWD as they try in desperation to tell each other information and respond to questions.  For a people who never traveled far from home...the inability to rapidly communicate in person must have been extremely frustrating.

I take my pen in hand to inform this few lines to you to let you know that I am well at present time and I hope that this few lines will find you in the same state of good health.  Further I let you know that this is the third letter that I wrote to you and didn’t get no answer yet from you.  I wrote one letter home with ten dollars in and I wrote for some shirts that you should send to me, and I didn’t get no answer yet but if you didn’t sent them yet you don’t need to send them now or later but I am sorry if them ten dollars didn’t come home.  Now I wish you would answer me this letter and let me know whether you got them ten dollars or not and let me know whether you did send them shirts or not and if you didn’t send them you don’t need to send them.  For I must come to a close.  Answer me this letter. 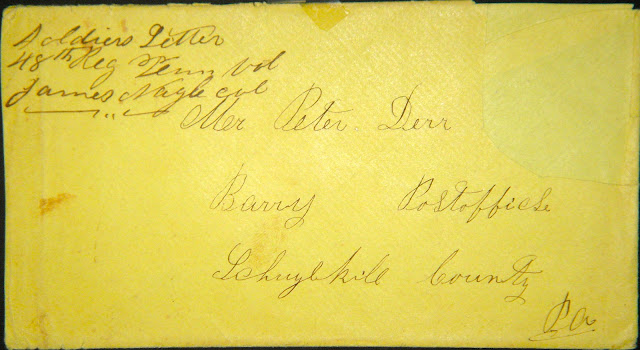 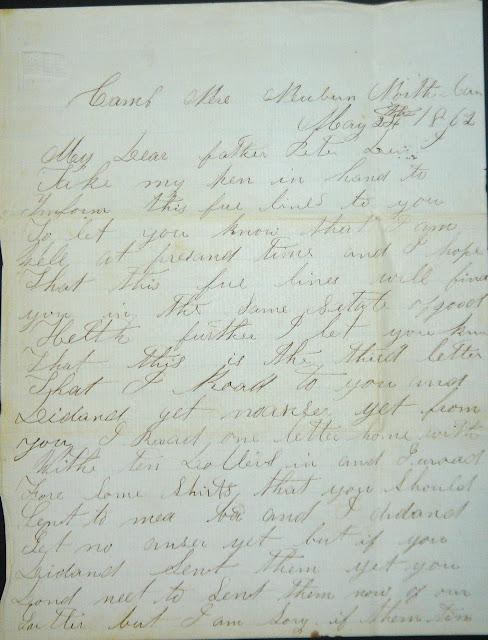 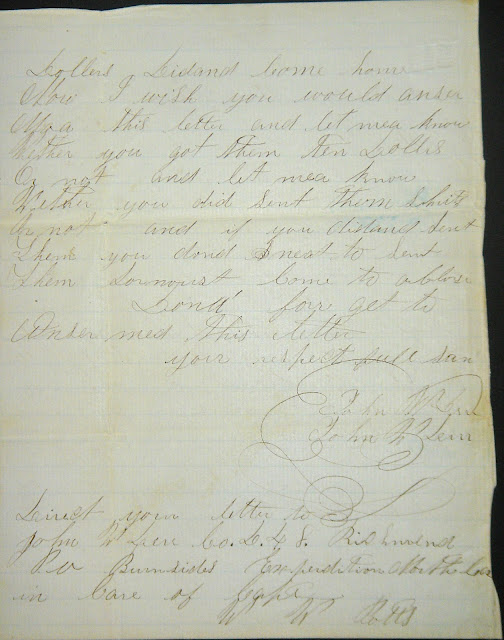 
By May of 1862, the battle for New Berne, North Carolina was over and the eastern coastal area of the state was under the control of Union forces commanded by General Burnsides.  The memory and excitement of the March, 1862 battle had given way to the mundane camp life as described in JWD's letters.  The 48th PVI would remain in North Carolina for another 2 months providing provost duties at encampments around the New Berne vicinity.  This part of the Civil War would be recorded as the highlight of General Burnsides' career with future command decisions at Fredericksburg and Petersburg being criticized and scrutinized for decades to come.  For now, however, the General was a happy man and a happy soldier living and bonding with his beloved men.

The letter of May 2, 1862 has nothing of historical note, except for the insight it provides to the dullness of life between major campaigns and battles.  This is not what we think of as "the Civil War"...the war we see in movies with non-stop action, battles, and drama.  As one soldier writes..."war is one big bore, interrupted by moments of terror".... sounds like a nightmare to me.

In the future I plan to highlight various notations on the envelopes used to mail the letters.  I found interesting information regarding franking of letters at the authority of various commanding officers of the 48th PVI.  I have, and will continue to, search for example and facsimiles of the signatures of various officers...e.g. Nagle, Siegfried, etc... as well as those of the chaplains, and doctors whose names are on the outside of these envelopes.  The writing is not that of JWD...for example...in the envelope below, the style of the letter "S" is different from the addressing provided by JWD for "Schuylkill" vs. the  "S" in the word "Soldier".  My question is this....could the notation have been made by Col. James Nagle of the 48th PVI...or was it one of his Adjutants.  More that likely it was the latter...however....it would be nice to check it out.


Also of note, is that this letter provides insight into JWD's immediate family.  His post-script notation to his brothers and sisters provides the names and a bit of sadness as he addresses them directly regarding his fears about his future. 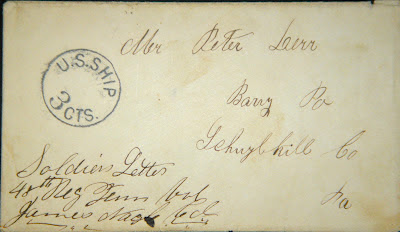 My Dear Father and Mother,
I take my pen in h and to inform this few lines to you to let you know that I am well at present time and I hope that this few lines will find you in the same state of good health.  Further I let you know that I received your letter on the first of this month and I was very glad to hear from you and to hear that you are all well at present time.  Further I let you know about my money.  I only sent $18.50 the first time and did put ten 10.00 dollars in a letter and you hadn’t it yet when you wrote that other one.  I wish you would let me know in your next letter whether you got it or not.  But that is all that I did send home but if them ten dollars will come home then I must have $68.00 dollars at home in all and if you will draw 20.00 more on the 15th of May then I must have $88.00 dollars at home but what you had to spend for my things.  And let me know whether you got them ten dollars or not and I wrote home for two shirts in the same letter where the money was.  Further I let you know that I will send a box of old soldiers clothes home in care of Francis Dengler.  So I have not much more to write to you this time.
Yours with respects,

John W. Derr
John W. Derr, John W. Derr, George Derr, Peter Derr, Daniel Derr, William Derr, Catharine Derr, Anna Derr, Elizabeth Derr, Solomy Derr.  Who knows whether we will see each other anymore or not but keep courage and think that this war may soon be over.  Your beloved and oldest brother John W. Derr as a private in the United States Army. 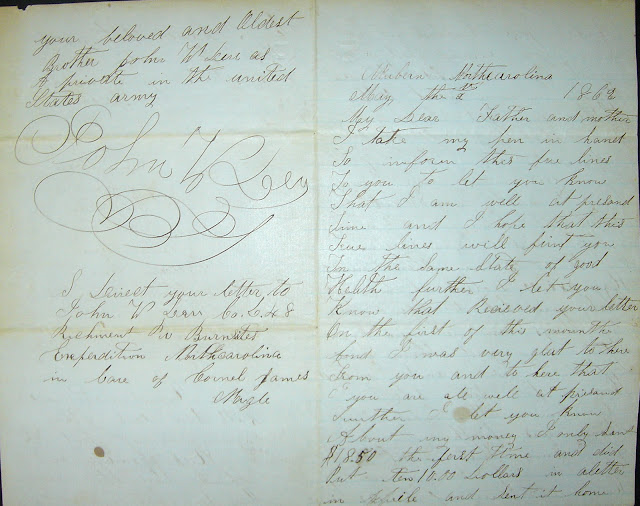 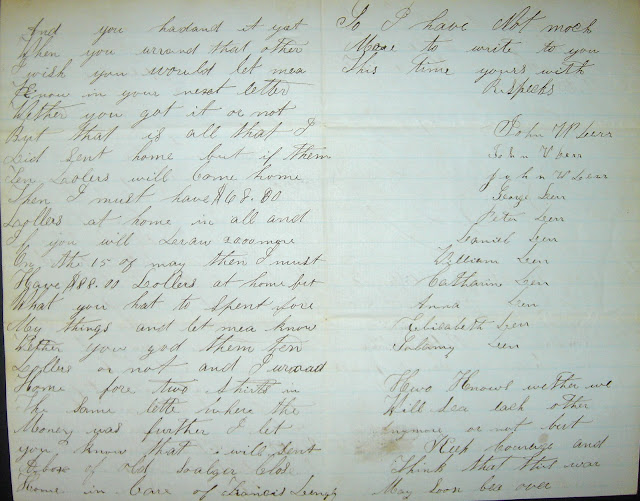 Posted by JWDletters at 8:38 AM No comments: