The letter of February 2, 1862 was written after JWD had recuperated from a long illness.  For seven weeks he suffered from bronchitis and possibly a variant of rheumatic fever.  Though he does not indicate the latter in his prior letters home...subsequent depositions during the pension hearing by his widow Magdalena, indicate that this was the case.   The depositions by fellow members of the 48th PVI describe the conditions that the 48th endured during the initial landings on Hatteras Island in November of 1861.  Fellow soldiers complained about how soldiers waded to shore and remained wet and cold for days after the initial landings.  Not long after the landings, JWD was bedridden with a severe illness that progressed to bronchitis or even possible pneumonia.  As he states, he was off duty for seven weeks.

This letter is a bit more normal, with JWD conveying news to his parents and asking questions about home.  Interestingly he writes to his parents about a letter he received from his Uncle Solomon Weikel...his mother's brother...and how his uncle's family had been sick with the measles.  In the 19th century, measles was a deadly disease and so this information was truly family news!    His reference to "Esther" is interesting to me.  I have not been able to determine who she was and what her relationship was with JWD.  I am only guessing, but I assume she was a girlfriend or a close lady friend.  Clearly, Esther was illiterate, owing to the comments made by him regarding her need to have the letter read. It is also clear that he did not want any personal and intimate words he might write to her to be made public by the reading of a letter.

My Dear Father,
I take my pen in hand to inform these few lines to you to let you know that I am well at present time and I hope that these few lines will find you in the same state of good health and further I let you know that I received that letter from you on the 2nd day of this month and one from Uncle Solomon Weikel.  He wrote to me that he didn’t hear anything from you the whole last summer and I wrote a letter to him and I told him you were all well when I got that letter from you.   Further I will let you know that they were all laying sick with the measles but they are all well again.  When he wrote that letter to me, further I let you know that John Brown and George Batzel are in the war too.  And if Esther wonders why I wouldn’t write to her anymore, tell her that she would have to get her letter read by somebody else and so I have no pleasure to write to her what I would like to write to her.  And she could always hear from me when I write home.  I send my best respects to Slotterbachs family and to the Fetterolfs and to Peter Fetterolf too and to all the rest of the neighbors and tell Mary E. Slotterbach that I was glad to hear from George and Harvey Snyder and William Derr and tell her if she would write to George again she should let him know that I am well and would like it very good so far.  Now I must quit writing because my fingers are too cold and I can’t write no more.  These few lines to you. 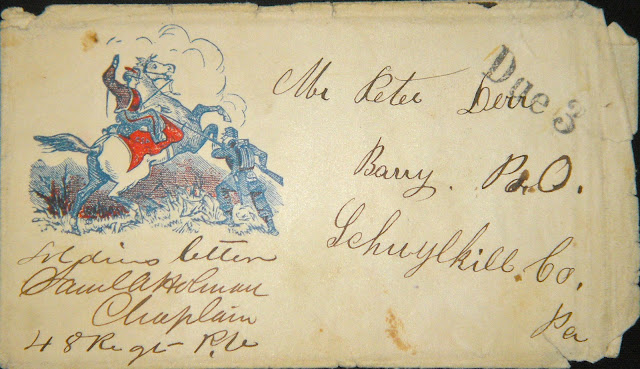 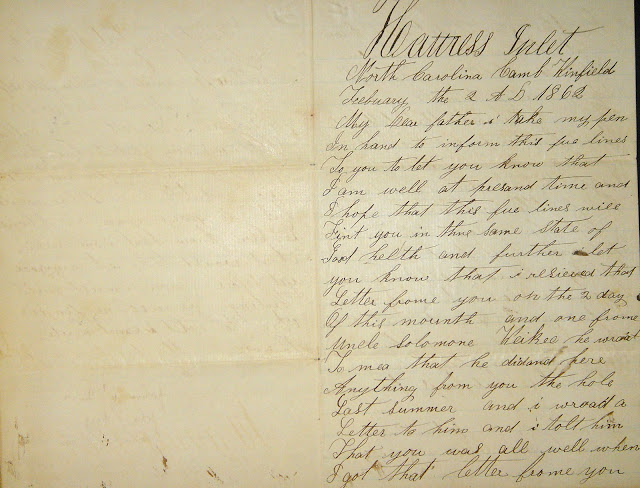 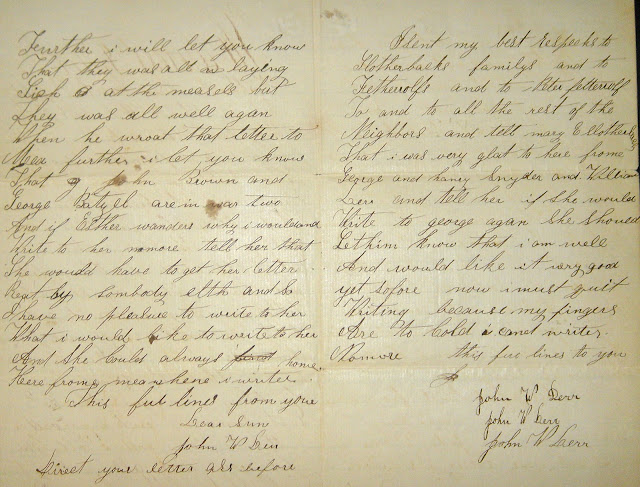 Posted by JWDletters at 8:16 PM