Thanks everyone for your patience...I know it has been a couple of weeks...so here you go....

I've often wondered about the food that soldiers had available to them during the Civil War.  Horror stories of southern soldiers eating shoe leather (when they could find a shoe) as well as grass, boiled bark and insects are documented.  While JWD did not have to endure this level of deprivation, it is clear that his diet changed dramatically owing to the realities of army logistics in the 19th century and the affect on food inventories.  Most army encampments had some sort of sutler informally attached to the unit...a retail camp follower would be a good description...but those "Quickie Marts" of the day were expensive and not always of the best quality.  Funny how some things never change!

I did a little research and found the following which is an excerpt from "Hardee's Rifle and Light Infantry Tactics":


One soldier's ration would include:
This would be supplemented by (per 100 rations):
These rations required cooking to make them palatable, but less experienced soldiers were unlikely to have their own cooking equipment and the large company-level kettles were sometimes left behind during a rapid advance.
Food often became infested with insects, especially rice or grain weevils. Infestation along with scarcity and unpalatability of rations made it necessary for soldiers to supplement their diets. A soldier could often gain a larger variety of foods either by foraging/raiding, by receiving food boxes from their families, or by purchasing items from sutlers. Families throughout the country were affected by the war and often had little to give. Those supporting the side currently in control of the area might be able to provide food, but in most cases, the food had to be acquired by theft.

***From Wikipedia....Search item:  "Foods of the American Civil War"


This list provides what a soldier in the North was SUPPOSED to have for a daily ration.  I did a comparison against what JWD states in various letters and it is clear to me that the average soldier did not get a consistent ration as stated above.

I have had numerous discussions with my Dad regarding the tone of some of JWD's letters.  We have both concluded that he had a bit of wit and sarcasm in some of his letters.  Something that his parents probably read and laughed about.  Letter #9 shows some of this sarcasm... 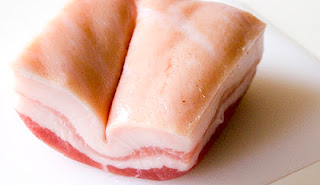 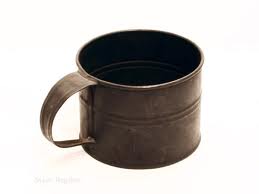 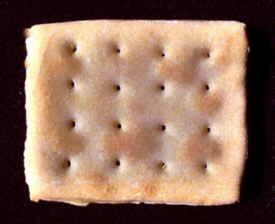 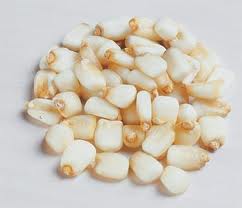 Describing a less than filling daily meal regime and by concluding with the words "...every meal something new..." conveys his humor at the monotony of the food provided to the soldier in the field.   This explains his excitement in Letter #6 (January 16, 1862) at receiving a box from home filled with the foods he loved best.  In college, I felt the same way when my Mom would send me a big box of cookies to supplement the terrible cafeteria food at my school.  I was immediately the most popular person in my dorm as other dorm mates would descend upon my room for a share of the home goods.  I imagine it was the same for JWD.

In addition to the description to his parents of his daily food situation, JWD also talks about his sister Elizabeth and her work as a domestic at the home of the "Heplers" as well as his other sister Salomy.  He references another friend's family...John Beaver...and is interested what is happening at home.  At this time, the 48th PVI is camped on Hatteras Island where it is windy, cold, wet and sandy.  I imagine he is very bored, tired, and longing for home.  So far for JWD...the war has not seen very much action....six months of drilling, moving from one place or another...and waiting.   Not quite what he thought he would be doing to defend the Union.  I believe that this is what drives his comments regarding the conclusion of the war and his eminent return to Pennsylvania.  Wishful thinking.  His reference of returning home in May is ironic as this is the time his real battlefield involvement begins.

Lastly...he is still concerned about ensuring that his pay and pay certificate is safe and secure.  After all...if he is going to be miserable in the army...he wants to come home to some reward for his service.

My Dear Father,
I take my pen in hand to write these few lines to you to let you know that I am well at present time and I hope these few lines will find you in the same state of good health.  Further I let you know that I received your letter yesterday and I was glad to hear from my dear sister Elizabeth and as much as I can understand she is at Hepler’s again.  But I would like to know whether she is single yet or not.  And I would like to know whether Salomy is at home or not.    I wish you would let me know how John Beaver’s family is getting along for you didn’t mention anything yet about them.  Further, I let you know that I like it very good yet.  So far we have plenty to eat and plenty to drink for we will get one cup of coffee and four crackers in the morning, and piece of old speg (bacon) and a cup of hominy for our dinner, and a cup of coffee and four crackers for supper and that is the way it changes off, every meal something new.  But we don’t expect to stay long on Hatteras Island anymore for we calculate to come on the mainland before long and till May we will all be at home in sweet Pennsylvania.  Further I let you know that I did send a letter home two weeks before this with a certificate in it to draw my money at home and I wish you would let me know whether you got it or not.  If you did, let me know, if not do the same.  You must excuse my bad writing and all my mistakes.  Answer me this letter as soon as you get this from me and direct as before. 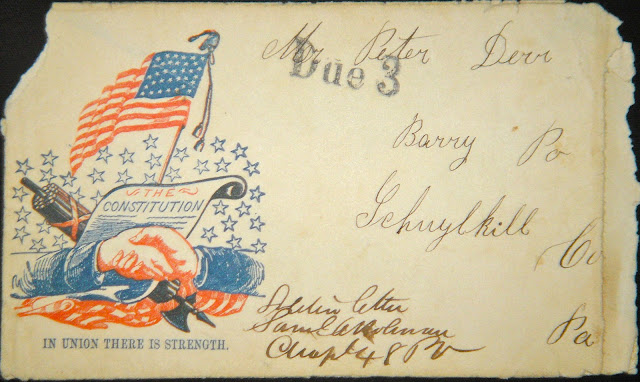 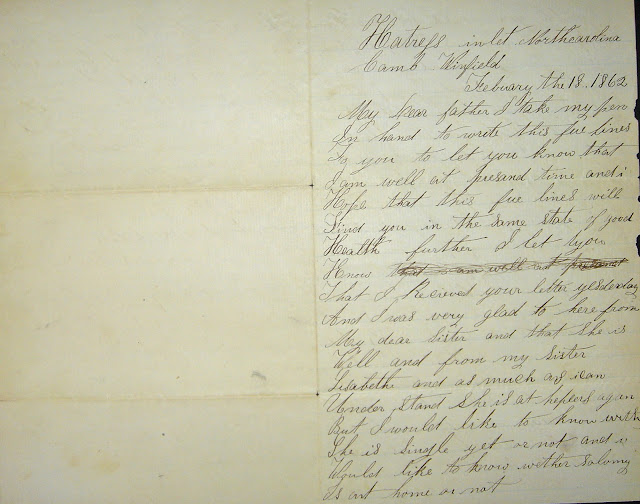 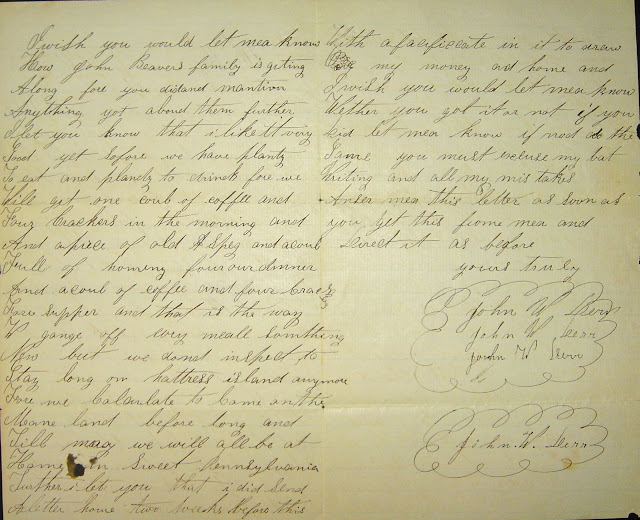 NOTE:   There is a large gap between Letter #9 and Letter #10.  Letter #10 will be available on April 7th.  I will be blogging on other items during the gap time, so please check back during that period.

Thanks to all of you for your comments, suggestions and well wishes.

Posted by JWDletters at 9:12 AM