As the war nears the end, and on the day before General Robert E. Lee surrenders the Army of  Northern Virginia at Appomattox, John is again writing home to his parent to give them an update.  An update that but a short two weeks removed from his prior letter of March 26, 1865.

The 48th PVI has now moved from the outskirts of Petersburg, VA to Danville Junction, VA on their way to Farmville, VA in pursuit of Lee's army.   This movement was as the result of General Grant's strategic "boxing" of Lee's army to prevent the latter from escaping the inevitable defeat of this Confederate army.

John writes his letter on April 8, 1865 and given the number of confederate prisoners and the rag-tag condition of Lee's army, he is probably aware of the coming end of the war.  By now, John is tired of the war and long's to come home.  The war has destroyed his body and soul with a continued deterioration of his spirit in his writing.  He has suffered through a leg wound at Second Bull Run, and numerous pneumonias starting in 1861.  Based on his doctor's analysis after the war and after his death in 1876, John suffered from Rheumatic Carditis as a result of having contracted Rheumatic Fever during the his service in the army.  The first instance was in the Fall and Winter of 1861/62 during the 48th PVI deployment to the Outer Banks of North Carolina.  Subsequent bouts of pneumonia and sickness followed him in 1862, 1863 and in 1864 after his work in the "Crater Mine" at Petersburg.

In his April 8th letter John writes to his parents and his insight is fairly keen.  He describes the fall of Petersburg and Richmond and anticipates Lynchburg and Danville's fall soon.  At this point he doesn't know that the very next day, Lee would capitulate and the his part of the war would be over.  He describes the prisoners (13,000) that he has seen and he is undoubtably happy that war is going the Union way.  He is still a teamster, which has served him well after his wounding.  He mentions his cousins John D. Weikle and that Weikle is "working on his drate (trade)".  I'm not sure what he does, but clearly his parents do.

I take my pen in hand to inform this few lines to you to let you know that I am well at present time and I am still driving team yet and expect to stay at yet a while.  I am sorry to hear that Father is sick but I hope till this letter comes to hand that he well again if not sooner.  I let you know that I got the shirt today and it was all right.  You didn’t say whether you was going to send another one or not but I want you to send me the other one too.  We are marching every day and it is very warm all ready.  I suppose you know that Petersburg and Richmond is in our hands and Lynchburg and Danville is gone up before long.  They are fighting every day but our corps ain’t engaged.  They are guarding the wagon train through from Petersburg.  Don’t trouble yourselfs about me.  I am still driving team and are getting along well.  I haven’t been sick since I was at home last spring.  I seen John D. Weikle today and he is well too and is working on his drate (trade).  We are making great calculations about the war being over till fall and I do think it will come so too.  I seen 13,000 rebel prisoners in two weeks time.  That looks pretty good to bring the war to a close.  I seen the City of Petersburg and come through it.  It is a nice place.  We didn’t come to Richmond yet but I hope we will come to see it for we was fighting for it long enough.  I have no more to write today so I will bring my letter to a close for this time.  So this few lines from your son.

Answer soon and direct your letter as before and let me know how Father is getting along.  So goodbye to you all till we see each other again.  I got the almanac. 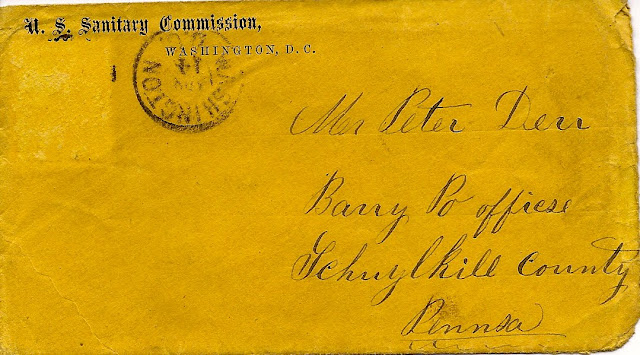 A few years ago, I had a friend who gave me two cobble stones that were thrown out during a repaving of downtown Petersburg, VA.  This repaving was done in the 1960s and these stones were eventually carted away as rubble.  They apparently had been in place since the 1840s in Petersburg.  John describes Petersburg as "a nice place".  I wonder if he trod upon these very stones! 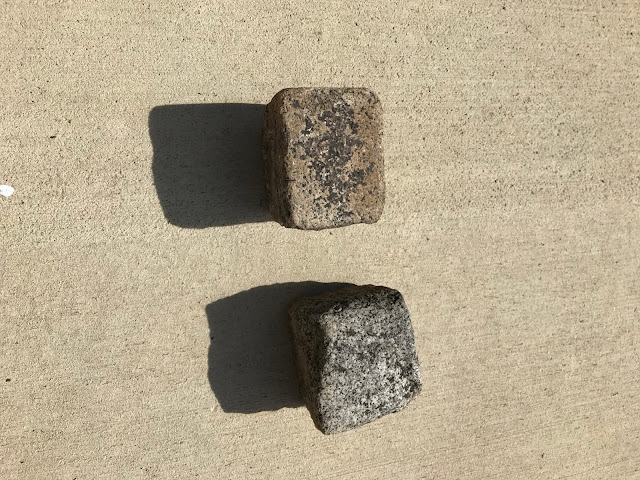