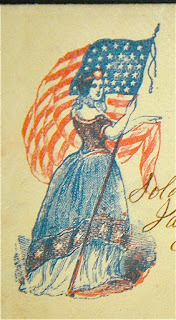 As previously mentioned in prior posts, there is a 15 month gap in the letters of John W. Derr spanning January 1863 and March of 1864.  During this period of time, there was a bit of a lull in the action for the 48th PVI after the tragic battle of Fredericksburg.  Fortunately for John...and myself by extension...he was still convalescing in the hospital in Philadelphia from his wounding at the Second Battle of Bull Run.  The battle of Fredericksburg in December of 1862 was where John H. Derr...mentioned previously in other posts...was wounded.  John H. Derr would die a month later in January of 1863 of these wounds and was buried at the  National Cemetery in Washington, DC.

Subsequent counter offensives were ordered by General Burnsides in early January, which were later rebuffed by President Lincoln, after significant protests from subordinate officers.  Later in January, General Burnsides would be replace by General Joseph Hooker via General Order 20, after Burnsides request to the president to relieve Hooker and other generals, was rejected.

January and February of 1863 saw little action for the 48th PVI and in fact paved the way for their eventual transition to provost duty in Lexington, Kentucky.  It was around this time that John W. Derr returned to duty with the 48th PVI.   Below are JWD's muster records for the period, which initially proved confusing, but later became clearer.

Muster rolls for November/December 1862, January/February 1863, and March/April show JWD as present for duty.  So, I was a bit confused by this since his letters shows him transferring to the Broad and Cherry Streets Hospital in Philadelphia in mid-December of 1862.   Later I was able to obtain ancillary muster roll cards from the the Broad and Cherry Streets Hospital, which showed him present there.  I suspect that the standard unit muster rolls were augmented after the fact to ensure he was paid out of the appropriate regimental pay bucket.  It would also appear that included in John W. Derr's  muster roll cards was John H. Derr, previously mentioned.  The writing looks similar to a "W." but is actually an "H." and is consistent with the fact that John H. Derr was wounded at Fredericksburg on December 13, 1862.  One other interesting note on the John W. Derr muster card from November/December of 1862 is that he deserted.  In actuality, he transferred from the Georgetown College Hospital on December 13, 1862 to the Broad and Cherry Street Hospital in Philadelphia.  I guess one part of the army did not coordinate with the other and his record shows him as deserted...when they could not find him in Washington DC during roll call on December 31, 1862. 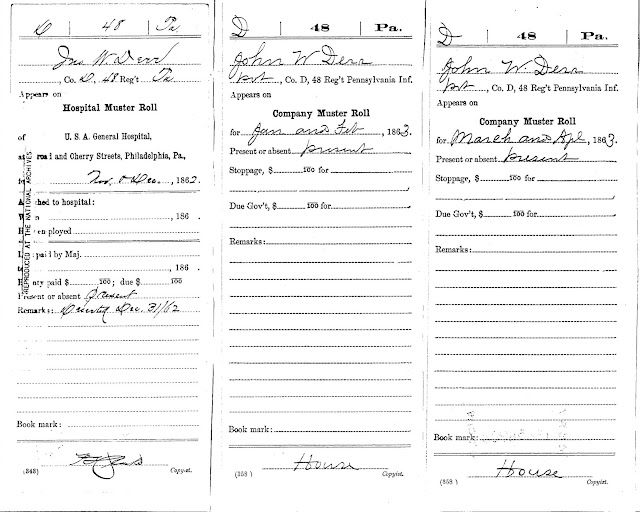 Then I found these which seem to confirm that he was still in the hospital until later January 1863: 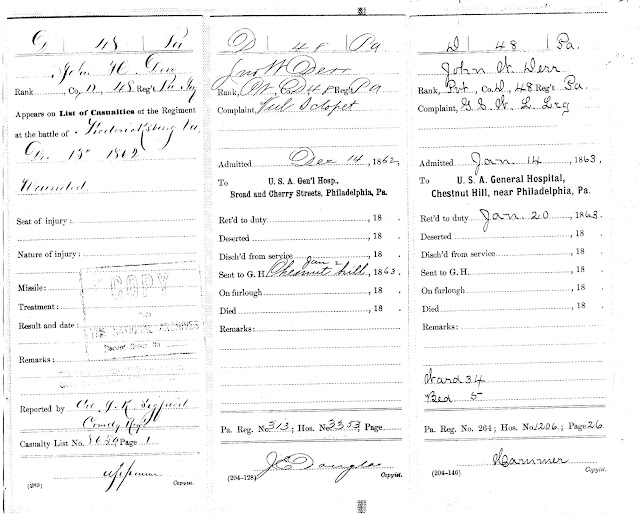 I am confident...based on family oral history...that he spent time in Kentucky and Tennessee.  Additionally, his re-enlistment in December 1863 at Blains Crossroads in Tennessee, confirms this.

Additionally, I was able to find an official record of JWD's capture and parole that he describes in his letter in September 1862 after the Second Battle of Bull Run....

Posted by JWDletters at 11:24 AM No comments: