Letter #3 as provided here, though very short in length, reveals the first of many maladies suffered by JWD during the course of the war...maladies that plagued him for the rest of his abbreviated life.

This letter was written for JWD by Franklin Hoch, a neighbor, friend and fellow member of the 48th PVI Company D, who helped him during his illness.  Hoch, a Sergeant, would later provide a deposition for JWD's wife, in her military pension application for widows of war veterans.

My Dear Father,
I take my pen in hand to let you know that I am not very healthy, that I am sick.  I had a fever but I ain’t well yet.  I am very weak.  I do not mind any pain but all that ails me and I have no appetite to eat anything.  I got paid the 27th of this month.  I sent my money home.  It is 18 ½ dollars.  I sent my money in Pottsville to Andrew Russel, there you can get it.  His office is at the second corner in Mahantengo Street.  It is 18 ½ dollars and you can get it any time that you go to Pottsville and take it home and keep it till I come home.  Write me as soon as you get this letter and write to me whether you got my money or not.  I must come to a close so excuse me I can’t write much just now at present time. 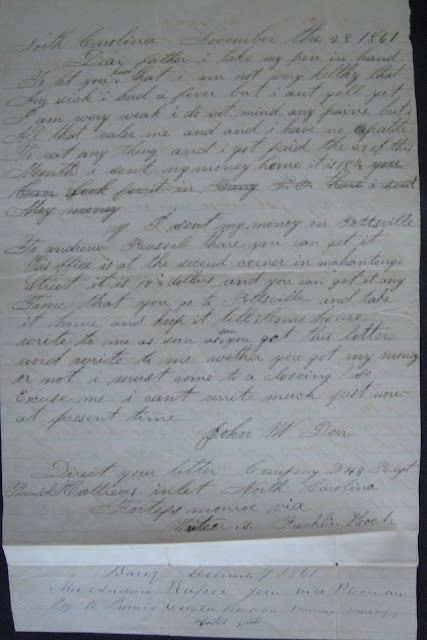 * there is an error in the muster roles for the 48th PVI that identifies Sgt. Franklin Hoch as "Hock".

Posted by JWDletters at 6:35 PM