Friends - What about John Snyder?

I was doing a bit of research today, deciding that it would be better than watching another football game...or what seems to pass for football in Washington, DC.  I know I am laying myself out there for the Pennsylvanians who root for that not-to-be-named eastern Pennsylvania team...but what the heck!  As I was saying...I decided to do some research and did a Google search on a name contained in one of the later letters from JWD.  That name was, Emanuel Bolich, mentioned in a letter from May of 1864.  I came across the CivilWarTalk forum website  www.civilwartalk.com  and saw a posting from a couple of years ago talking/asking about information on an Emanuel Bolich from the 17th Pa. Regiment.  Interestingly, JWD's letter had Bolich contained within.  Additionally, the Bolich's being a prominent family in the Barry Township area of Schuylkill County, meant that many of the other documents I have in my possession have Bolich's contained within...e.g.  Mortgages, land sales, etc...  I decided to post to the forum in hopes that any information that I might have can help this family researcher in their quest.  I guess that is one of the reasons I am doing this blog...in hopes that names I have contained within the letters might help another person doing like research on their ancestors.  Hopefully, JWD was mentioned in some other soldier's letter and the favor can be returned.  Thus is the investigative nature of this kind of work.

Tonight, I did a little bit of research on John Snyder...mentioned in Letter #2 posted last month.  The reason I have very little is because I found very little.  Actually, during the research I found many John Snyders referenced in the ARIAS system (Pennsylvania State Archive database), but determined that only one could possibly be THE John Snyder that JWD referred to in his letter.

John H. Snyder was a private in the 96th Pennsylvania Volunteer Infantry, company E.  Snyder enlisted in the 96th on March 14th, 1864 at the age of 23.   I have no information on what he was doing prior to his enlistment late in the war, but his occupation is identified as a "wheelwright".

Though he is mentioned only once in the letters, I found his story as interesting as any of the others I have researched.  What I do know is that John H. Snyder enlisted in the 96th PVI in March of 1864, just in time to fight in the bloody battles of the Wilderness and Spotsylvania Courthouse,  during the Rapidan Campaign of May 1864.   According to Samuel Bates account in his book "History of Pennsylvania Volunteers, 1861-1865", John H. Snyder was listed as missing in action (MIA) on May 10, 1864 at the battle of Spotsylvania Courthouse in Virginia.   This means that Snyder was active in his unit for less than 2 months before he went MIA during this vicious battle.   I have been unable to find any record of him resurfacing during or after the war, but he is not listed anywhere that I can find as a Killed in Action (KIA).

I was saddened by the thought that apparently he was never found, never identified.  He continues to be listed as MIA in the official records.  Since JWD fought at these battles, I wonder whether he saw him...talked to him...or fought with him during the time he went missing.  I guess this is just one of the sad stories and duties that returning soldiers such as JWD had to tell to anxious family members back home.  I can only imagine. 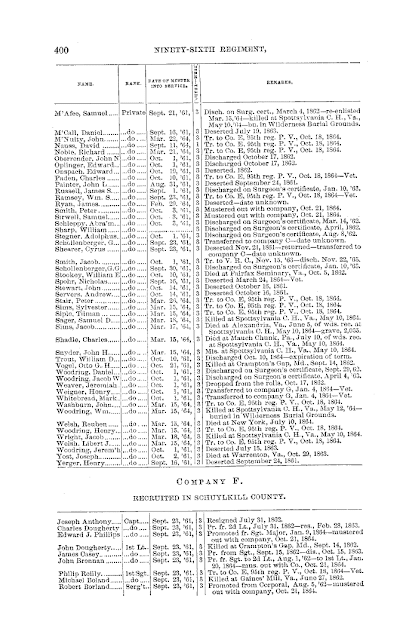 Posted by JWDletters at 7:55 PM