"The Wound Dresser" by Walt Whitman: A review and analysis 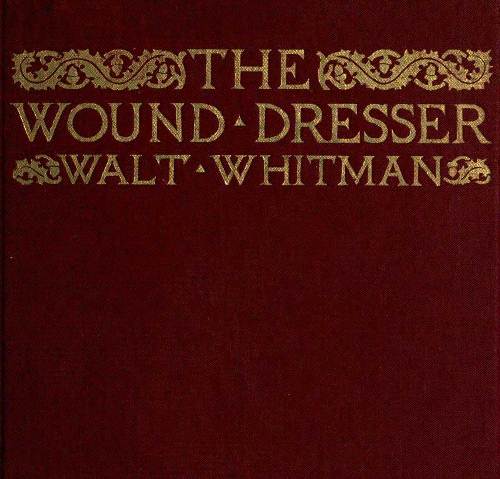 I just finished reading The Wound Dresser, by Walt Whitman and would like to share with you my review of the book and a few insights into the relevance to my blog project.  This not to be confused with his poem, The Wound Dresser which is part of his poetry book, Drum Taps, rather is a book that looks back at his services to the sick and wounded during the Civil War.

The Wound Dresser is a collection letters and columns written by Whitman during the time he spent nursing the sick, wounded and dying at the numerous Army hospitals in and around the Washington D.C. area during the Civil War.  At that time in his life, Whitman was a well known poet both loved and despised by the public for his prose and his lifestyle.  By 1862, his poetry collection, The Leaves of Grass, was a best seller of the day having been in print for nearly 20 years.  This afforded him a level of notoriety as well as scrutiny for his lifestyle as rumors persisted of his homosexuality. 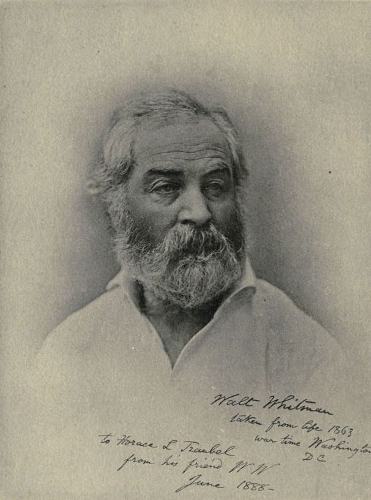 The book centers around the time when Whitman traveled to Washington D.C. to search for his brother George, who had been wounded in the Battle of Fredericksburg in December of 1862.   George Whitman was a captain in the 51st New York Infantry and during that battle, was wounded in the face by a shell fragment.  Whitman's futile search in Washington, eventually led him to his brother's regiment in the field and a reunion with George at Falmouth, Virginia.  Fortunately, George's wounds were minor and Whitman was able to report home to his mother the good news.  It was during that time in the field with his brother's regiment that Whitman spent time helping the hospital staff with errands, chores and nursing activities.  The most important support provided by Whitman was sitting with wound and sick soldiers and providing comfort and support.  The two weeks that Whitman spent in the field with the sick and the dying so moved him that it started a mission that lasted 3 years.  His time in the Union hospitals between 1862 and 1865 influenced him and changed the tone and color of his poetry.  His subsequent poetry book, Drum Taps, reflects his change in tone.

The Wound Dresser is a window into the thoughts, and emotions of one of the country's greatest poets.  His letters home to his mother, brothers and sisters provide a rare glimpse into the soul of a man who was so dramatically affected by what he saw and what he did during the Civil War.

So why should you read this book....well...besides the fact that it will give you a more orthogonal view of the Civil War...one that is less about the strategy and execution of battles, and more about the aftermath, it is just a good insightful read.  As for me....I have stated that the blog would not only be about the letters and their publishing anniversary, but about expanded research and "gap filling".   Also, I am interested in "connections".   Given that JWD was wounded at the battle of Second Bull Run and subsequently treated in a Washington D.C. hospital (Georgetown College Hospital to be more specific), I wondered if he was ever visited by Walt Whitman.  During my research, I found that Whitman arrived in Washington D.C. by train on December 19, 1862...the exact date that JWD was transferred from Washington D.C. to the Philadelphia Broad Street hospital for further recuperation.  Could they have passed each other at the train station?  Maybe....but probably not.   More plausible is that they might have met during the Whitman's nursing activities and visits to his brother George in the field.  It so happens that the 51st NY Infantry regiment was in the Army IX Corps, the same as JWD.  The 51st NY and the 48th Pa, fought in the same battles and subsequently encamped in the same locations.  Could it be that JWD met Walt Whitman in one of the many field hospitals during JWD's numerous illnesses?  Maybe.  The Wound Dresser documents the many letters Whitman wrote home of his nursing care for these sick and wounded soldiers while in the field visiting his brother.

From Drum Taps, by Walt Whitman

1
An old man bending I come among new faces,
Years looking backward resuming in answer to children,
Come tell us old man, as from young men and maidens that love me,
(Arous'd and angry, I'd thought to beat the alarum, and urge
relentless war,
But soon my fingers fail'd me, my face droop'd and I resign'd myself,
To sit by the wounded and soothe them, or silently watch the dead;)
Years hence of these scenes, of these furious passions, these
chances,
Of unsurpass'd heroes, (was one side so brave? the other was equally
brave;)
Now be witness again, paint the mightiest armies of earth,
Of those armies so rapid so wondrous what saw you to tell us?
What stays with you latest and deepest? of curious panics,
Of hard-fought engagements or sieges tremendous what deepest remains?
2
O maidens and young men I love and that love me,
What you ask of my days those the strangest and sudden your talking
recalls,
Soldier alert I arrive after a long march cover'd with sweat and
dust,
In the nick of time I come, plunge in the fight, loudly shout in the
rush of successful charge,
Enter the captur'd works—yet lo, like a swift-running river they
fade,
Pass and are gone they fade—I dwell not on soldiers' perils or
soldiers' joys,
(Both I remember well-many the hardships, few the joys, yet I was
content.)
But in silence, in dreams' projections,
While the world of gain and appearance and mirth goes on,
So soon what is over forgotten, and waves wash the imprints off the
sand,
With hinged knees returning I enter the doors, (while for you up
there,
Whoever you are, follow without noise and be of strong heart.)
Bearing the bandages, water and sponge,
Straight and swift to my wounded I go,
Where they lie on the ground after the battle brought in,
Where their priceless blood reddens the grass the ground,
Or to the rows of the hospital tent, or under the roof'd hospital,
To the long rows of cots up and down each side I return,
To each and all one after another I drawn near, not one do I miss,
An attendant follows holding a tray, he carries a refuse pail,
Soon to be fill'd with clotted rags and blood, emptied, and fill'd
again.
I onward go, I stop,
With hinged knees and steady hand to dress wounds,
I am firm with each, the pangs are sharp yet unavoidable,
One turns to me his appealing eyes-poor boy! I never knew you,
Yet I think I could not refuse this moment to die for you, if that
would save you.
3
On, on I go, (open doors of time! open hospital doors!)
The crush'd head I dress, (poor crazed hand tear not the bandage
away,)
The neck of the cavalry-man with the bullet through and through I
examine,
Hard the breathing rattles, quite glazed already the eye, yet life
struggles hard,
(Come sweet death! be persuaded O beautiful death!
In mercy come quickly.)
From the stump of the arm, the amputated hand,
I undo the clotted lint, remove the slough, wash off the matter and
blood,
Back on his pillow the soldier bends with curv'd neck and
side-falling head,
His eyes are closed, his face is pale, he dares not look on the
bloody stump,
And has not yet look'd on it.
I dress a wound in the side, deep, deep,
But a day or two more, for see the frame all wasted and sinking,
And the yellow-blue countenance see.
I dress the perforated shoulder, the foot with the bullet-wound,
Cleanse the one with a gnawing and putrid gangrene, so sickening, so
offensive,
While the attendant stands behind aside me holding the tray and pail.
I am faithful, I do not give out,
The fractur'd thigh, the knee, the wound in the abdomen,
These and more I dress with impassive hand, (yet deep in my breast a
fire, a burning flame.)
4
Thus in silence in dreams' projections,
Returning, resuming, I thread my way through the hospitals,
The hurt and wounded I pacify with soothing hand,
I sit by the restless all the dark night, some are so young,
Some suffer so much, I recall the experience sweet and sad,
(Many a soldier's loving arms about this neck have cross'd and
rested,
Many a soldier's kiss dwells on these bearded lips.)