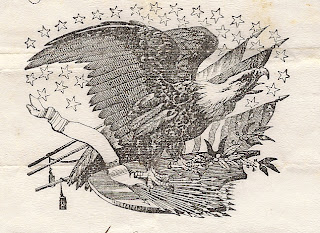 The letter of June 27, 1862 provides confirmation of the unhealthy conditions of army camp life during the Civil War.  In this letter, JWD describes the death of a comrade and friend Adam B. Klock.  I did some research on Private Klock and found a few discrepancies in the various records.

In the Pennsylvania ARIAS Civil War Soldiers database...it refers to Private Klock as Andrew B. Klock.  I don't know if Adam was a nickname or if JWD just made a mistake in writing his name in the letter, but there is a difference.  Also, in Munsell's...History of Schulykill County, Pa., it lists his name as Andrew.  However, another discrepancy in that record shows J.H. Dorr as dying of disease, when it was actually J.H. Derr (previously mentioned in my prior posts).

Upon the saddest chapter of this work we now enter. It is to give a record of the names of the sons of Schuylkill who died that their country might live. They yielded up their spirits in the noblest cause and while we mourn, we are consoled by the reflection that their memories will be embalmed in the national heart while Freedom claims a votary on our continent.
FORTY-EIGHTH PENNSYLVANIA REGIMENT

Note that this record shows Klock's death date as June 30, 1862.  We know that is not possible, since the letter from JWD to his parents described his death, and was written on June 27, 1862.  This highlights some of the errors that are in the "official" records.


In Letter #16, JWD describes that Andrew "Adam" B. Klock died of Typhoid fever.  A common problem during the war owing to the unsanitary conditions of the camps and army life at that time.

Excerpt from the National Institutes of Health (NIH) website regarding Typhoid fever....

Typhoid fever is an infection that causes diarrhea and a rash -- most commonly due to a type of bacteria called Salmonella typhi (S. typhi).

The bacteria that cause typhoid fever -- S. typhi -- spread through contaminated food, drink, or water. If you eat or drink something that is contaminated, the bacteria enter your body. They travel into your intestines, and then into your bloodstream, where they can get to your lymph nodes, gallbladder, liver, spleen, and other parts of your body.
A few people can become carriers of S. typhi and continue to release the bacteria in their stools for years, spreading the disease.
Typhoid fever is common in developing countries, but fewer than 400 cases are reported in the U.S. each year. Most cases in the U.S. are brought in from other countries where typhoid fever is common.

Early symptoms include fever, general ill-feeling, and abdominal pain. A high (typically over 103 degrees Fahrenheit) fever and severe diarrhea occur as the disease gets worse.
Some people with typhoid fever develop a rash called "rose spots," which are small red spots on the abdomen and chest.

In addition to JWD's report of the death of Private Klock, he talks about how miserable life is North Carolina in the summer.  For a Pennsylvania boy who lived in the mountain regions and probably never experienced the hot, humid and sweltering summers of the south, life inNew Berne, NC was undoubtably miserable.

I take pen in hand to inform this few lines to you to let you know that I am well at present time and I hope that this few lines will find you in the same state of good health.  Further, I let you know that I received your letter this evening after we came in from dress parade and I was very glad to hear from  you and to here that you are all well and I am very glad to hear that you got my ten dollars which I did send home and got my shirts which you did send to me and I am very glad that you got all my letters which I wrote to you.  The reason was that I wrote so many to you was I did send that first letter home with them ten dollars and I didn’t get no answer for about four weeks and I thought that it might be lost maybe but so we are all right.  But I am sorry to say that Adam B. Klock died.  He died on the 23 and we buried him the 24.  He had typhoid fever.  We was only about one week sick.  I let you know that it is very hot here and very unhealthy.  We are in great danger of starvation but we put our trust in God.  Don’t forget to answer this letter as soon as you get this from me.  So much from me your respectful son. 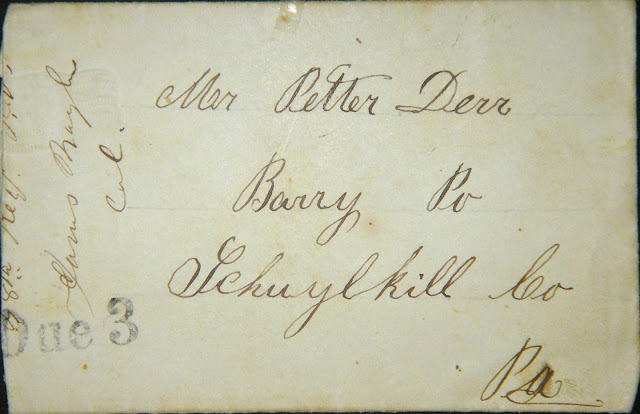 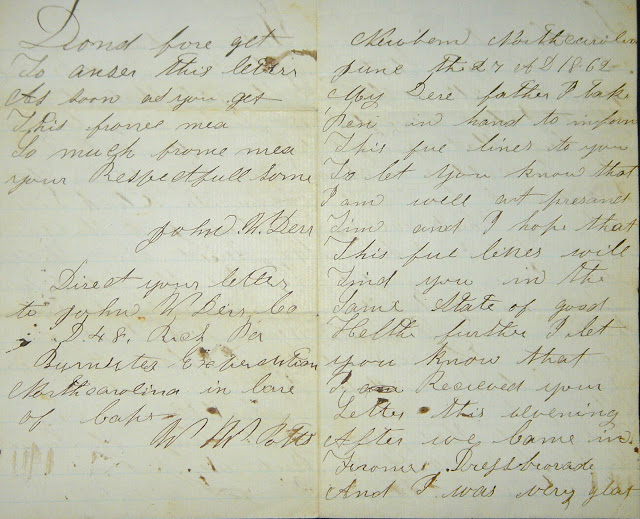 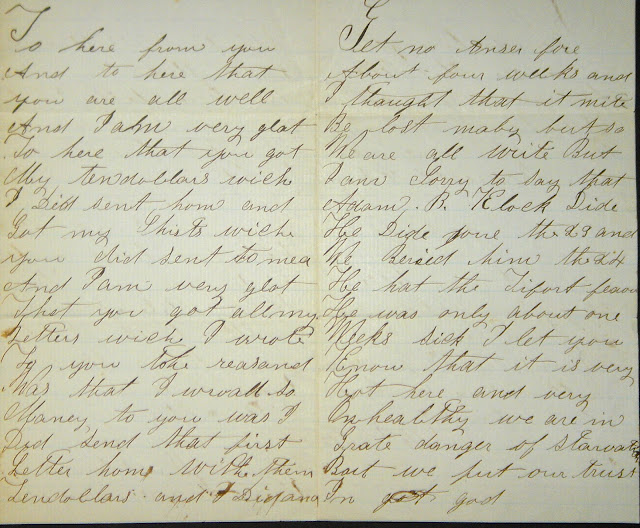 Posted by JWDletters at 6:38 AM