Clean up and Follow-up 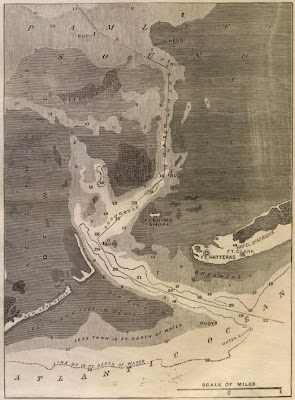 I was working on Letter #21 last week and during the course of the exercise, I found a section of the Google Blogger that I had been remiss in accessing.  I set up this blog to allow for interaction with you...the reader...and to get comments, suggestions and insights into the interests of my readers.  I was puzzled as to why I was getting no comments on the blog (internal to the commenting tool) and yet would get comments directly sent to jwdletters@gmail.com.  Well...mystery solved.   I finally located and reviewed the "Comments" in the Blogger tool and found about a dozen comments that you...the readers...have sent me.  Some as far back as a year.  Wow!  I am feeling kinda silly having asked for comments and then...when folks do send comments...I give the impression that I ignore them.  For that, I profusely apologize!  For those of you who sent the comments directly to the gmail account, I did respond to those...as well as those who commented on my Facebook link and the various groups I belong to in Linkedin.  I have since posted all of those dated comments in their respective postings, so you can see  your comments, if you go back to those dates.  So...I will start reviewing the Blogger comments and posting them on this website on a regular basis...and I am sorry for appearing to be so aloof.


In 2011, I traveled to the Outer Banks of North Carolina to spend a few days at the beach and to do a little research into Burnsides Expedition to North Carolina.  The 48th PVI played a prominent role in this campaign and I wanted to spend a few days absorbing the atmosphere and reflecting on the environment that was endured by my ancestor 149 years prior.  The trip was planned and I was very excited by adventure I was embarking upon.....then came hurricane Irene.  Delaying my trip by 2 days, I ventured south to the Outer Banks only to find that access to the location of the 48th PVI on Hatteras Island had been blocked by storm damage and a missing/washed out road.  While I was 'bummed' by missing this opportunity, I knew that I would return to the Outer Banks...a favorite vacation destination for our family.  So...this year I made another try...and was successful!

My plan was to visit two locations on Hatteras Island...the wreck of the SS Oriental....and the southern point of the island where markers are located commemorating the Burnsides Expedition.   I had been told that wreck of the SS Oriental in May of 1862 was one that was still visible today.  The wreck is located about 100 yards offshore in the surf about 10 miles south of the Oregon inlet across the street from the Pea Island nature center.  I have often heard from people about sites and locations and how "easy" they are to see/access and upon going there myself, find just the opposite.  In this case, the rumors are true.  I parked at the visitor center with my daughter, and we made the 150 yard trek across the road and up the sand dune towards the beach.  At the top of the dune, you get a very good view of the entire beach for miles and a great perch from which to view the ocean....and there...about 100 yards offshore....the wreck of the Oriental.  Well....the cast iron boiler at least.  What you see (below) is the remains of the boiler of the ship and it is just tall enough to breach the surface so you see it with each passing wave.  Very cool.  Especially when you think that it has been 150 years since the ship foundered and sank in a tropical storm leaving many of the passengers to either swim to shore, or the await rescue from the SS George Peabody.   As a reminder...my interest in the Oriental is because of the connection to the Peabody...the ship that transported Derr from Fort Monroe to Hatteras Island in 1861.  Documentation indicates that during the rescue operations, members of the 48th PVI provided support on the ship to the sinking ship.  Was Derr part of that?  I don't think we will ever know.
For more on this see my posting of...

Boiler images taken from the shore of the SS Oriental...... 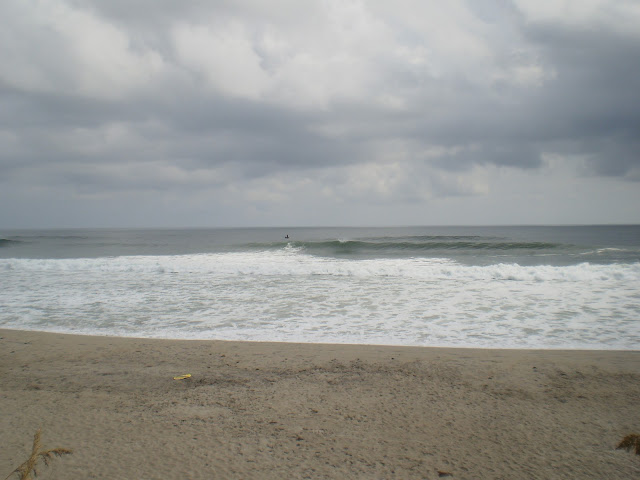 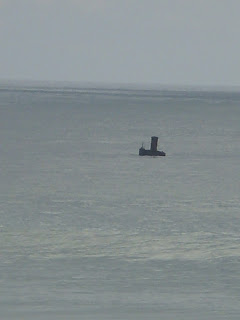 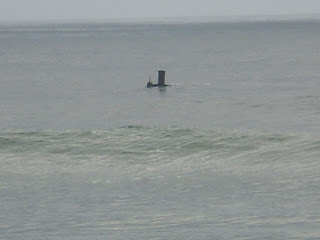 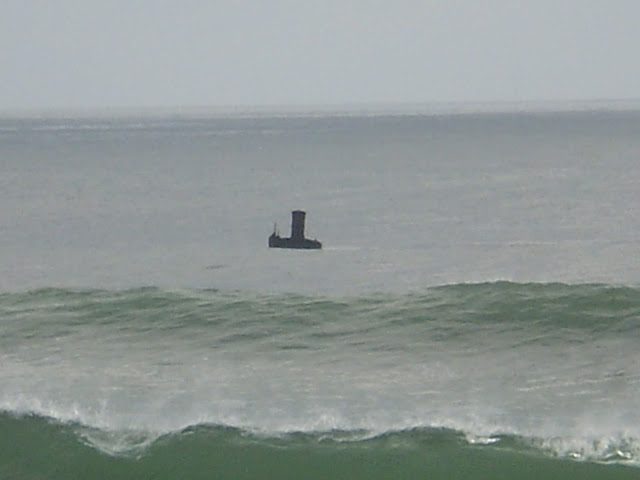 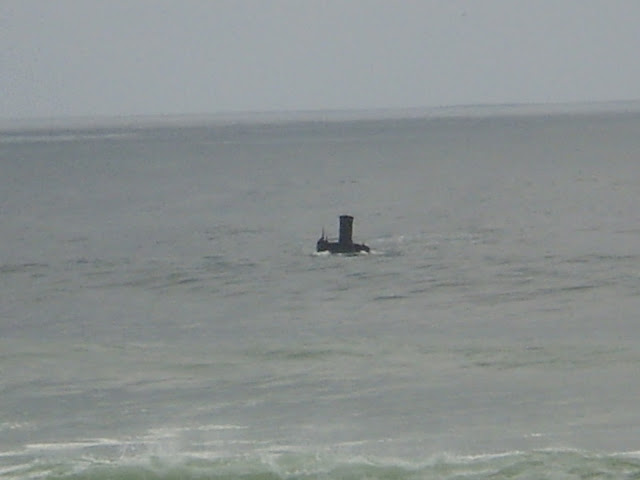 The second location I decided to visit was the location at the drive end of the Hatteras Island near the "Graveyard of the Atlantic Museum" where markers are located in the museum parking lot commemorating the Burnsides Expedition.   The 48th PVI, being and integral part of this expedition, camped and fought here during the defense of the newly captured Forts Hatteras and Clark.  Later  the 48th PVI would transit further south on ships as part of the New Berne campaign near the Neuse River.  Derr's letters of 1861 and early 1862 indicate participation in these actions as well as his discomfort at living in the cold/wet (winter) and hot/sandy (summer) environment of the Outer Banks of  North Carolina.  As a side note...having visited these locations during the month of August in the dead of summer, I can not imagine the discomfort of these soldiers at living in the hot, humid, sandy and insect ridden environment as they did.  Unbelievable. 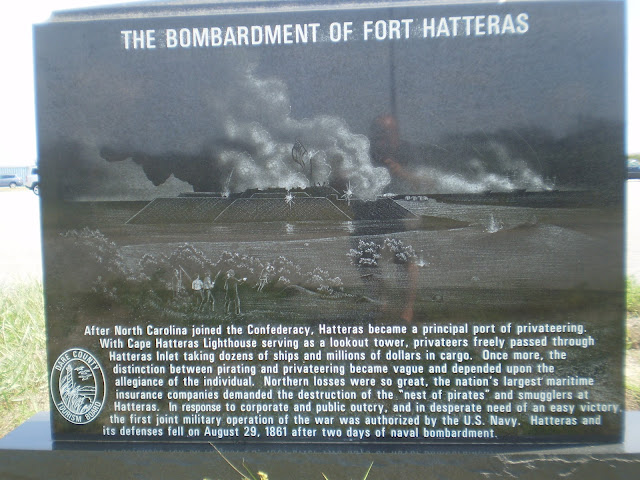 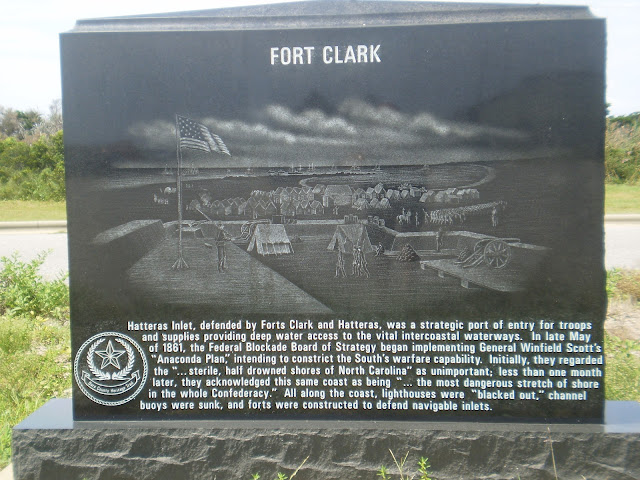 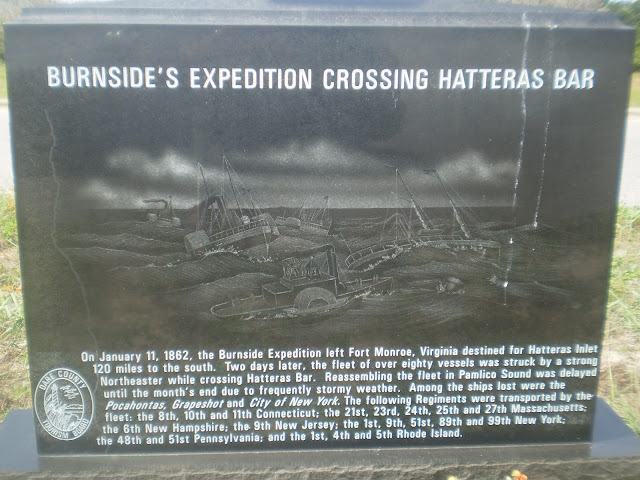 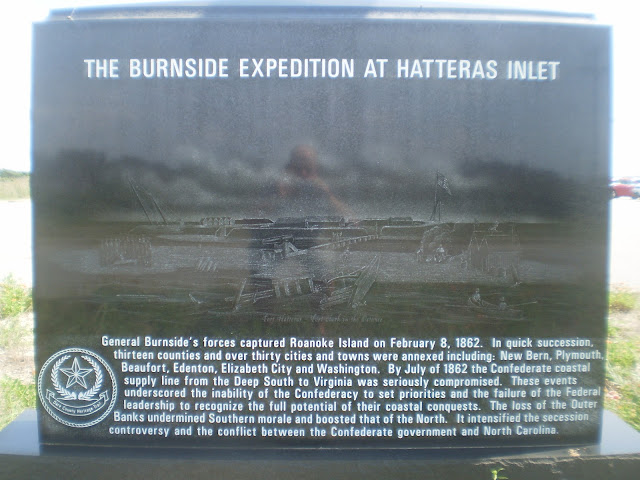 Yeah...that's me taking the picture in the reflection....

Posted by JWDletters at 9:00 AM