Next week I will be posting letter #2, which was written on October 19, 1861, and has been the reference for these last two posts.  Last week I wrote about a good friend of JWD and how this research project continues to shed new light on the life of my GG-grandfather.  As I mentioned previously in discussing Francis Dengler, the revelation that he was a good friend of JWD is what makes this project fun and interesting.

I had my father over for a visit last week and we discussed the "Dengler Connection".  It was very satisfying to see the excitement in his eyes as he learned a previously unknown fact about JWD.   When I was younger, my father and I collaborated extensively on the letters and spent hours discussing and postulating on the meaning and significance of certain references within them.  He is the primary reason for my continued fascination with the life of JWD and the various connections with history.  Dad is a history buff.  So am I.  I guess it was that common love of history that afforded us the opportunity to spend time together researching and...just plain bouncing ideas off each other.  While he spent the last 40 years educating me on JWD and the content of the letters...providing translation of the Pennsylvania Dutch colloquialisms, etc...it was me who provided the surprises!

First surprise.....
About 30 years ago, I made my first trip the National Archives to research JWD's Civil War records and to make photocopies of them for later usage.  That lead to the revelation of the "big family secret" that laid dormant for 70 years...more on that in another posting.  First big surprise!  I remember him saying..."So that's the big secret!".   Then I was hooked.  Could I find more facts, details that I could give back to him?

Another surprise....
Pension records indicate that he was not married during the war.  My father had been under the belief that he was, due to a letter which references his wife.  Depositions in the pension application have refuted that assumption.

Latest.....
The "Dengler Connection"....Dad always thought that Dengler was a merchant in Pottsville or Minersville, Pennsylvania...and that JWD used him as a posting point for his parcels sent home.  Now, we know that Francis Dengler was a fellow soldier...albeit in another regiment (162nd PVI), and that he was a very good friend.


One last item I will insert in today's blog is JWD's other good friend, Josiah Fetherolf.  Fetherolf is frequently referenced in the letters (4 times) and is clearly another good buddy of JWD.  Preliminary research suggests that Fetherolf, unlike Dengler, never was a soldier in the war.  I have scanned various roster files from many Pennsylvania regiments that recruited men from the Deep Creek and Schulykill county region and have found nothing.  Additionally, a search through the Pennsylvania State Archive ARIAS system for a "soldier card", proved unsuccessful.  Lastly, the headstone of Josiah Fetherolf shows no indication of participation in the war.

A few people have asked me why I research these other men vs. a more dedicated approach to JWD and the battles, generals, leaders, etc... I guess I have decided that many others have already analyzed and dissected battles, battlefields, generals, politics and weaponry and can do it much much more effectively...I have decided that I like researching connections....those items that can bolster an otherwise mundane soldier's letter and bring it to life.  A connection that can provide those relationship, heartaches, concerns, that would be lost if not highlighted....and lastly...I would like to share the names and insights into other soldier's referenced in these letters to allow anyone who may be researching their veteran ancestor, to get that same thrill of finding them in some obscure and potentially forgotten letter. 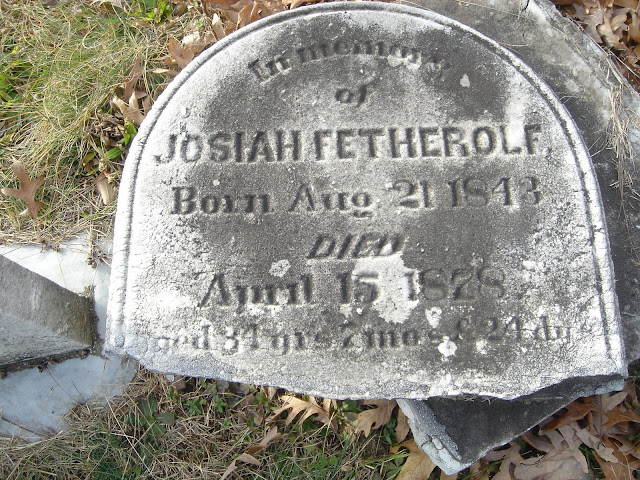