John W. Derr and the Battle of the Crater

I had the pleasure of corresponding this week with Brett Schulte, the author of the website/blog "Beyond the Crater"  http://www.beyondthecrater.com/.  Brett's website is dedicated to the history and research of the Battle of the Crater during the siege of Petersburg, Va, in July of 1864.  Brett's website contains a vast array of information, diaries, letters, correspondence as well as behind the scenes views of the events leading up to and after the mine explosion.  I responded to Brett's call for diaries and letters from soldiers who participated in the digging of the mine as well as the assault on the crater after the detonation of the explosives in the mine.  As a member of the 48th PVI, JWD had significant participation in the digging of the mine.  His letter dated July 13, 1864 describes a bit of information that he probably should not have been writing about in his letters home.  The actual explosion of the mine on July 30, 1864 occurred more than two weeks after JWD's disclosure to his parents.  Below is the transcription of the letter as well as the actual letter facsimile:

My Dear Father and Mother,
I take the present opportunity to inform this few lines to you to let you know that I am well at present time and I hope that this few lines will find you in the same state of good health.  I received your letter today and I was very glad to hear that you are well all the time and I am happy that I can say the same.  I am also glad to hear that you got my money and I hope you will take good care of it, as you did before.  And if we don’t soon get paid I will be very apt to send for some of it but I hope we will soon get paid off.  We don’t need much money, but I want some once in a while.  I suppose you took good care that you got my pay all in good money for I wouldn’t like to have any bad money for I have to work hard for it.  We hear that the rebels are making a raid into Pennsylvania again but I hope it will be to their sorrow.  I hope they will lose more men then they did last summer at Gettysburg and they didn’t gain much that time by all appearances.  It is for no use to write anything to you about the war for you know more at home then we do out here for we do hear very little but what we see.  But I will let you know that we will have a great explosion here before very long.  We are going to blow up the rebels forts.  They are undermining them now.  They have two or three all ready now and our regiment is working at one and they are near done with it and I hope it will work all right, if they get it going. *
I have no more to write today so I will bring these few lines to a close for this time with the intention of hearing from you soon again.  So I will remain your affectionate son.

Answer soon and direct your letter as before.  Give my love to my brothers and sisters and to all inquiring friends.  Tell Josiah Fetterolf if he wouldn’t write a letter to me I would pin his nose up on his forehead.  G.D. the mules they shake too much I can’t write anymore. 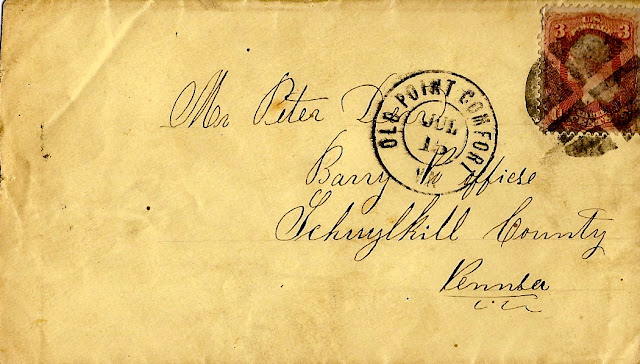 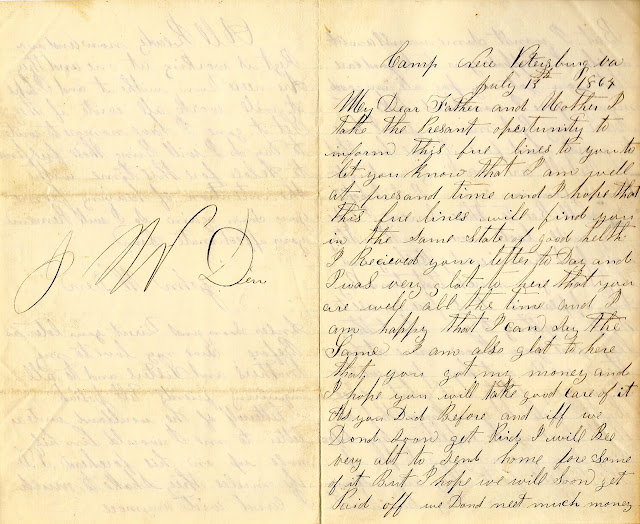 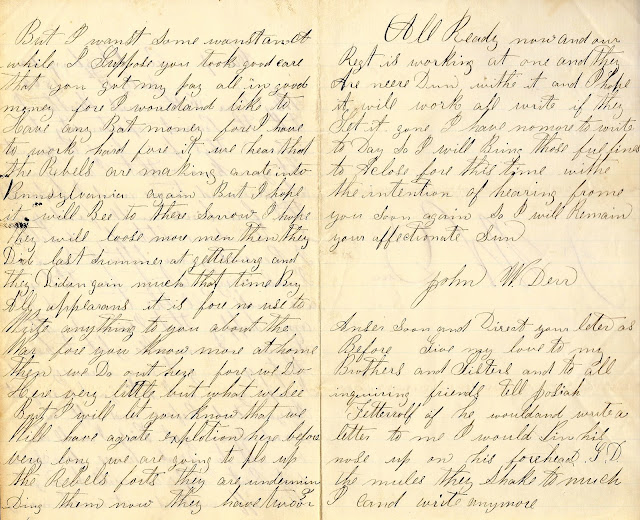 I know this jumps the gun a bit on posting on the 150th anniversary of the creation of this letter, but I suspect that it doesn't violate any "rules" to post it more than once.  I appreciate the interest of Brett and his loyal following on the "Beyond the Crater" website and I encourage all of you to visit his site....it is just plain excellent.


In addition to this letter, I have other documents...well copies of other documents from the National Archives....which provide corroborating evidence of his work in the actual mine.  JWD's official records in the Archives, provide the pension application information and affidavits that I have previously mentioned in other postings.   These affidavits from fellow soldiers tell about how JWD participated in the digging of the mine and indeed became very ill from working in the cold damp conditions.  He eventually contracted bronchitis and was out of active duty for a few weeks after the mine explosion.  Below is the pension deposition from Sgt. Otto Bodo of the 48th Pennsylvania Volunteer Infantry Co. "D"  (Click on image to enlarge): 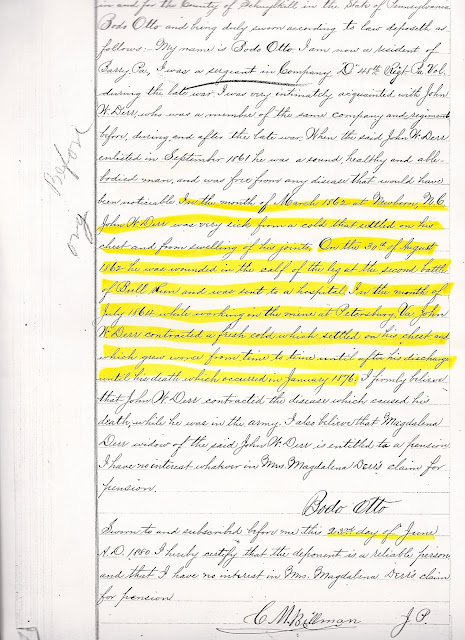 Petersburg Mine Entrance in July, 1864 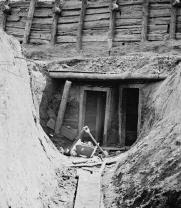 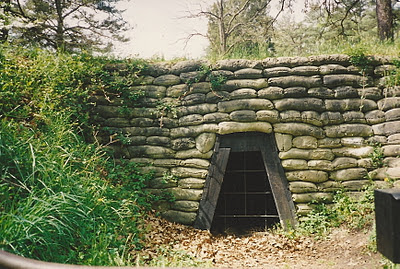 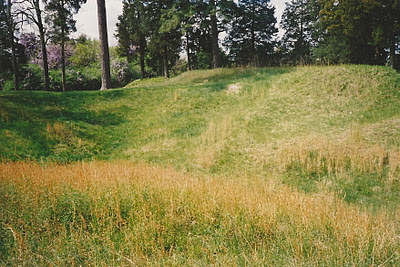 Lastly....I really enjoy the humor that JWD put into some of his letters...such as the postscript for his friend Josiah Fetterolf.  He was irritated that his friend did not write enough letters to him...something you can understand... as a letter to a soldier in the field was worth its weight in gold.  Also, his cursing of the mules in his wagon train.  JWD, at this point in the war, also served as a teamster which allowed him to continue in the army service with a handicap from his leg wound at Second Bull Run.  It brings a more realistic perspective on the man.